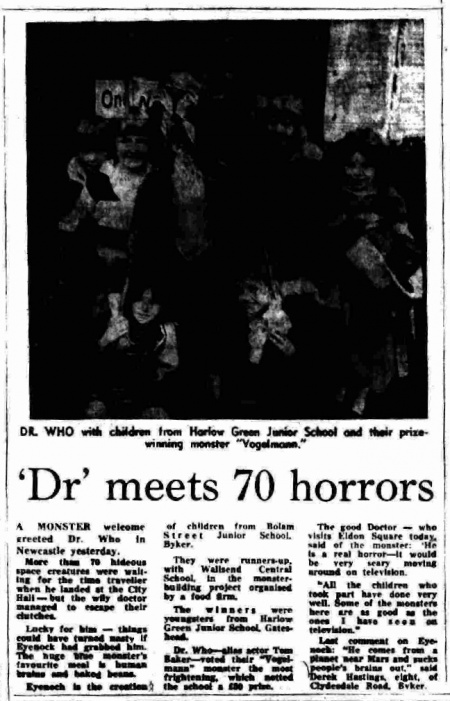 A monster welcome greeted Dr. Who in Newcastle yesterday.

More than 70 hideous space creatures were waiting for the time traveller when he landed at the City Hall -- but the wily doctor managed to escape their clutches.

Lucky for him -- things could have turned nasty if Eyenoch had grabbed him. The huge blue monster's favourite meal is human brains and baked beans.

Eyenoch is the creation of children from Bolam Street Junior High School, Byker.

They were runners up with Wallsend Central School, in the monster-building project organised by a food firm.

The winners were youngsters from Harlow Green Junior School, Gateshead.

Dr. Who -- alias actor Tom Baker -- voted their "Vogelmann" monster the most frightening, which netted to the school of £90 prize.

The good Doctor -- who visits Alton Square today, said of the monster: "He is a real horror. I would be very scary moving around on television.

"All the children who took part have done very well. Some of the monsters here are as good as the ones I've seen on television.

Last comment on Eyenoch: "He comes from the planet near Mars and sucks people's brains out," said Derek Hastings, eight, of Clydesdale Road, Byker.

Caption: Dr. Who with children from Harlow Green Junior School and their prize winning monster "Vogelmann."