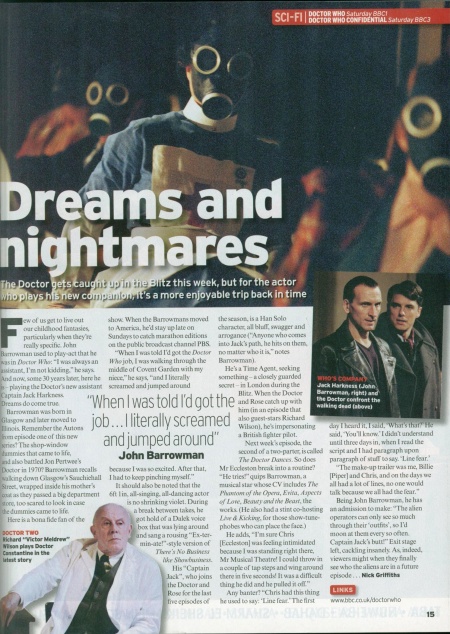 The Doctor gets caught up in the blitz this week, but for the actor who plays his new companion, it's a more enjoyable trip back in time

Few of us get to live out our childhood fantasies, particularly when they're really specific. John Barrowman used to play-act that he was in Doctor Who: "I was always an assistant, I'm not kidding," he says. And now, some 30 years later, here he— playing the Doctor's new assistant Captain Jack Harkness. Dreams do come true.

Barrowman was born in Glasgow and later moved to Illinois. Remember the Autons from episode one of this new series? The shop-window dummies that came to life, and also battled Jon Pertwee's Doctor in 1970? Barrowman recalls walking down Glasgow's Sauchiehall Street, wrapped inside his mother's coat as they passed a big department store, too scared to look in case the dummies came to life.

Here is a bona fide fan of the show. When the Barrowmans moved to America, he'd stay up late on Sundays to catch marathon editions on the public broadcast channel PBS.

"When I was told I'd got the Doctor Who job, I was walking through the middle of Covent Garden with my niece," he says, "and I literally screamed and jumped around because I was so excited. After that, I had to keep pinching myself."

It should also be noted that the 6ft 1 in, all-singing, all-dancing actor is no shrinking violet. During a break between takes, he got hold of a Dalek voice box that was lying around and sang a rousing "Ex-termin-ate!"-style version of There's No Business like Showbusiness.

His "Captain Jack", who joins the Doctor and Rose for the last five episodes of the season, is a Han Solo character, all bluff, swagger and arrogance ("Anyone who comes into Jack's path, he hits on them, no matter who it is," notes Barrowman).

He's a Time Agent, seeking something— a closely guarded secret— in London during the Blitz. When the Doctor and Rose catch up with him (in an episode that also guest-stars Richard Wilson), he's impersonating a British fighter pilot.

Next week's episode, the second of a two-parter, is called The Doctor Dances. So does Mr Eccleston break into a routine? "He tries!" quips Barrowman, a musical star whose CV includes The Phantom of the Opera, Evita, Aspects of Love, Beauty and the Beast, the works. (He also had a stint co-hosting Live & Kicking, for those show-tunephobes who can place the face.)

He adds, "I'm sure Chris [Eccleston] was feeling intimidated because I was standing right there, Mr Musical Theatre! I could throw in a couple of tap steps and wing around there in five seconds! It was a difficult thing he did and he pulled it off."

Any banter? "Chris had this thing he used to say: 'Line fear.' The first day I heard it, I said, "What's that?" He said, 'You'll know' I didn't understand until three days in, when I read the script and I had paragraph upon paragraph of stuff to say. 'Line fear.'

"The make-up trailer was me, Billie [Piper] and Chris, and on the days we all had a lot of lines, no one would talk because we all had the fear."

Being John Barrowman, he has an admission to make: "The alien operators can only see so much through their 'outfits', so I'd moon at them every so often. Captain Jack's butt!" Exit stage left, cackling insanely. As, indeed, viewers might when they finally see who the aliens are in a future episode ... Nick Griffiths