Elisabeth Sladen, 63, of 'Doctor Who' 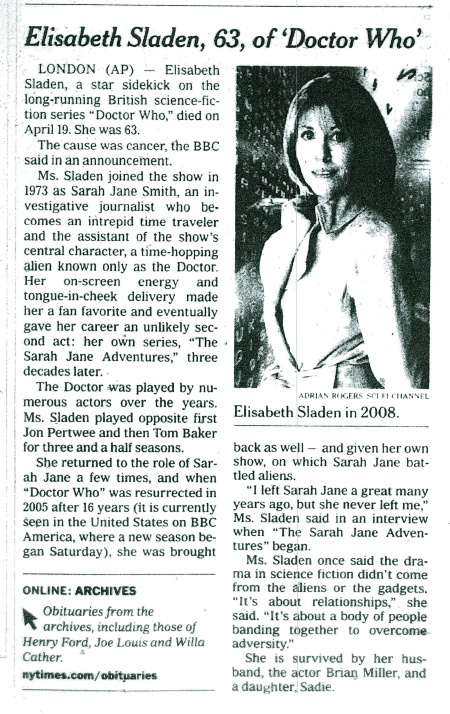 LONDON (AP) -- Elisabeth Sladen, a 'star sidekick on the long-running British science-fiction series "Doctor Who," died on April 19. She was 63.

The cause was cancer, the BBC said in an announcement.

Ms. Sladen joined the show in 1973 as Sarah Jane Smith, an investigative journalist who becomes an intrepid time traveler and the assistant of the show's central character, a time-hopping alien known only as the Doctor. Her on-screen energy and tongue-in-cheek delivery made her a fan favorite and eventually gave her career an unlikely second act: her own series, "The Sarah Jane Adventures," three decades later.

The Doctor was played by numerous actors over the years. Ms. Sladen played opposite first Jon Pertwee and then Tom Baker for three and a half seasons.

She returned to the role of Sarah Jane a few times, and when "Doctor Who" was resurrected in 2005 after 16 years (it is currently seen in the United States on BBC America, where a new season began Saturday), she was brought back as well and given her own show, on which Sarah Jane battled aliens.

"I left Sarah Jane a great many years ago, but she never left me," Ms. Sladen said in an interview when "The Sarah Jane Adventures" began.

Ms. Sladen once said the drama in science fiction didn't come from the aliens or the gadgets. "it's about relationships," she said. "It's - out a body of people banding together to overcome adversity."

She is survived by her husband, the actor Brian, Miller; and a daughter, Sadie.