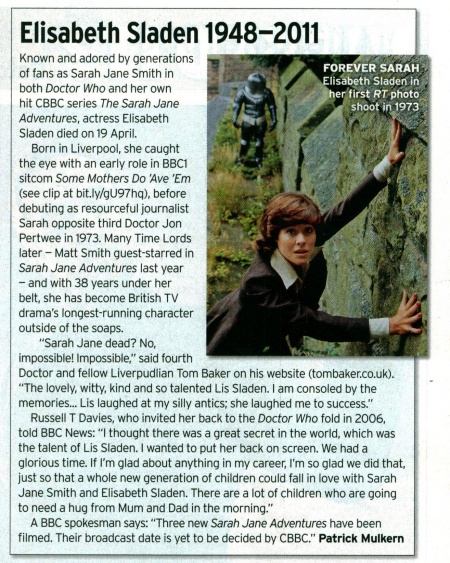 Known and adored by generations of fans as Sarah Jane Smith in both Doctor Who and her own hit CBBC series The Sarah Jane Adventures, actress Elisabeth Sladen died on 19 April.

Born in Liverpool, she caught the eye with an early role in BBC1 sitcom Some Mothers Do Ave 'Em (see clip at bit.ly/gU97hq), before debuting as resourceful journalist Sarah opposite third Doctor Jon Pertwee in 1973. Many Time Lords later — Matt Smith guest-starred in Sarah Jane Adventures last year — and with 38 years under her belt, she has become British TV drama's longest-running character outside of the soaps.

'The lovely, witty, kind and so talented Lis Sladen. I am consoled by the memories... Lis laughed at my silly antics; she laughed me to success."

Russell T Davies, who invited her back to the Doctor Who fold in 2006, told BBC News: "I thought there was a great secret in the world, which was the talent of Lis Sladen. I wanted to put her back on screen. We had a glorious time. If I'm glad about anything in my career, I'm so glad we did that, just so that a whole new generation of children could fall in love with Sarah Jane Smith and Elisabeth Sladen. There are a lot of children who are going to need a hug from Mum and Dad in the morning."

A BBC spokesman says: "Three new Sarah Jane Adventures have been filmed. Their broadcast date is yet to be decided by CBBC."

Elisabeth Sladen in her first RT photo shoot in 1973