End of time for Dr Who 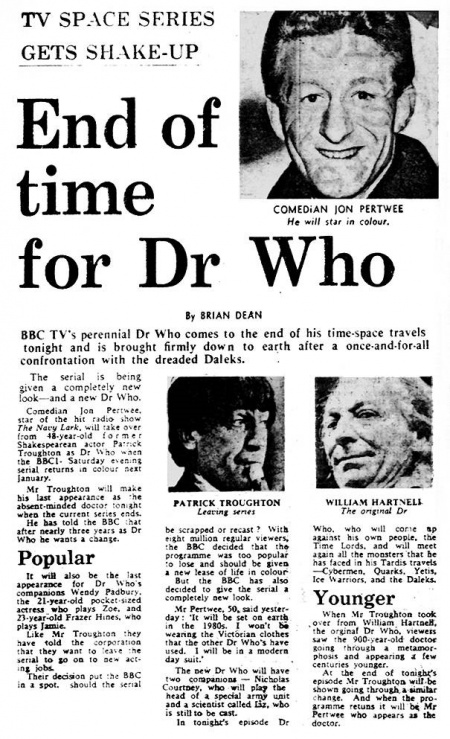 TV space series gets shake up

BBC TV's perennial Dr Who comes to an end of his time and space travels tonight and is brought firmly down to earth after a once and for all confrontation with the dreaded Daleks.

The serial is being given a completely new look and a new Dr Who.

Comedian Jon Pertwee, star of the hit radio show The Navy Lark, will take over from 48-year-old former Shakespearean actor Patrick Troughton when the BBC one on Saturday evenings serial returns in colour next January.

Mr. Troughton will make his last appearance as the absent-minded doctor tonight when the current series ends.

He has told the BBC that after nearly three years as Dr Who he wants a change.

It will also be the last appearance for Dr Who's companions Wendy Padbury, the 21-year-old pocket-sized actress who plays Zoe, and 23-year-old Frazer Hines, who plays Jamie.

Like Mr. Troughton they have told the cooperation that they want to leave the serial to go on to new acting jobs.

Their decision put the BBC in a spot. Should the serial be scrapped or recast? With eight million regular viewers, the BBC decided that the programme was too popular to lose and should be given a new lease of life in colour.

But that the BBC has also decided to give the serial a completely new look.

But Mr. Pertwee, 50, said yesterday: "It will be set on earth in the 1980s. I won't be wearing the Victorian clothes that the other Dr Who's have used. I will be in a modern day suit."

The new Dr Who will have two companions -- Nicholas Courtney, who will play the head of a special army unit and the scientist called Liz, who is still to be cast.

In tonight's episode Dr Who, who will come up against his own people, the Time Lords, and will meet again all the monsters that he has faced in his Tardis travels Cybermen, Quarks, Yetis, Ice Warriors, and the Daleks.

When Mr. Troughton took over from William Hartnell, the original Dr Who, viewers saw the 900 year-old doctor going through a metamorphosis and appearing a few centuries younger.

At the end of tonight's episode Mr. Troughton will be shown going through a similar change. And when the program returns it will be Mr. Pertwee who appears as the doctor.