Enter "Doctor Who Magazine" No 352 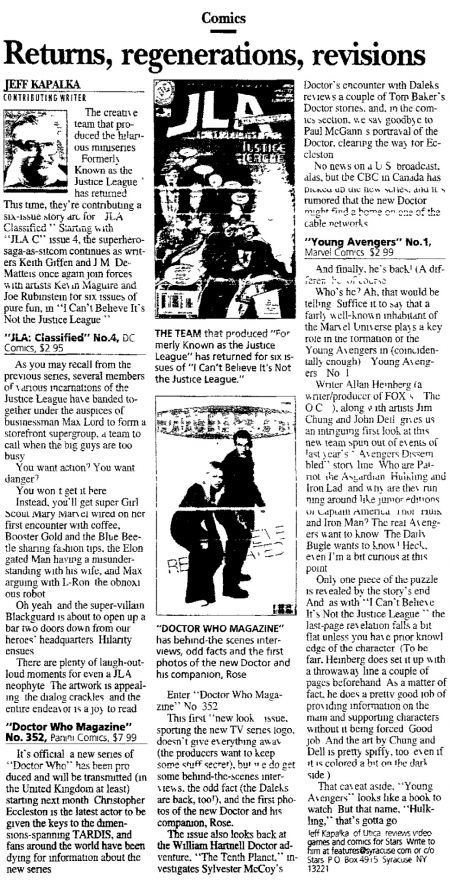 It's official a new series of "Doctor Who" has been produced and will be transmitted (in the United Kingdom at least) starting next month Christopher Eccleston is the latest actor to be given the keys to the dimensions-spanning TARDIS, and fans around the world have been dying for information about the new series

Enter "Doctor Who Magazine" No 352

This first "new look issue, sporting the new TV series logo, doesn't give everything away (the producers want to keep some stuff secret), but we do get some behind-the-scenes inters testis. the odd fact (the Daleks are back, too!), and the first photos of the new Doctor and his companion, Rose.

The issue also looks back at the William Hartnell Doctor adventure, "The Tenth Planet," investigates Sylvester McCoy's Doctor's encounter with Daleks reviews a couple of Tom Baker's Doctor stories, and, in the comics section, we say goodbye to Paul McGann s portrayal of the Doctor, clearing the way for Eccleston.

No news on a US broadcast. alas, but the CBC in Canada has picked up the new series, and it's rumored that the new Doctor might find a home on one of the cable networks

Caption: "DOCTOR WHO MAGAZINE" has behind-the scenes interviews, odd facts and the first photos of the new Doctor and his companion, Rose