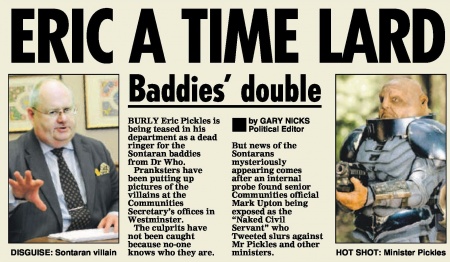 BURLY Eric Pickles is being teased in his department as a dead ringer for the Sontaran baddies from Dr Who. Pranksters have been putting up pictures of the villains at the Communities Secretary's offices in Westminster. The culprits have not been caught because no-one knows who they are.

But news of the Sontarans mysteriously appearing comes after an internal probe found senior Communities official Mark Upton being exposed as the "Naked Civil Servant" who Tweeted slurs against Mr Pickles and other ministers.