Even The Army Helped His Career As Actor 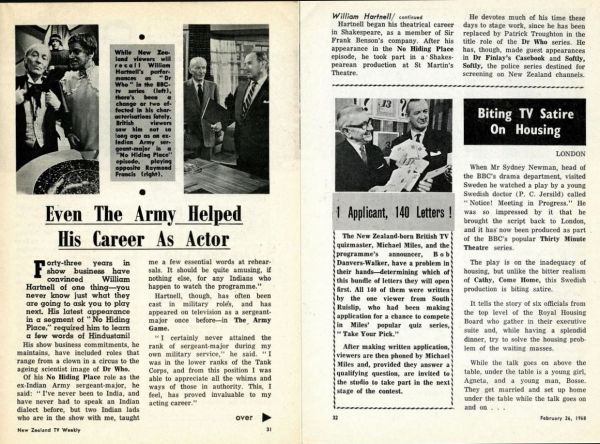 Forty-three years in show business have convinced William Hartnell of one thing—you never know just what they are going to ask you to play next. His latest appearance in a segment of "No Hiding Place," required him to learn a few words of Hindustani!

His show business commitments, he maintains, have included roles that range from a clown in a circus to the ageing scientist image of Dr Who.

Of his No Hiding Place role as the ex-Indian Army sergeant-major, he said: " I've never been to India, and have never had to speak an Indian dialect before, but two Indian lads who are in the show with me, taught me a few essential words at rehearsals. It should be quite amusing, if nothing else, for any Indians who happen to watch the programme."

Hartnell, though, has often been cast in military role's, and has appeared on television as a sergeant-major once before—in The Army Game.

"I certainly never attained the rank of sergeant-major during my own military service," he said. "I was in the lower ranks of the Tank Corps, and from this position I was able to appreciate all the whims and ways of those in authority. This, I feel, has proved invaluable to my acting career."

Hartnell began his theatrical career in Shakespeare, as a member of Sir Frank Benson's company. After his appearance in the No Hiding Place episode, he took part in a Shakespearean production at St Martin's Theatre.

He devotes much of his time these days to stage work, since he has been replaced by Patrick Troughton in the title role of the Dr Who series. He has, though, made guest appearances in Dr Finlay's Casebook and Softly, Softly, the police series destined for screening on New Zealand channels.

Caption: While New Zealand viewers will recall William Hartnell's performances as "Dr Who" in the BBC-tv series (left), there's been a change or two effected in his characterisations lately. British viewers saw him not so long ago as on ex-Indian Army sergeant-major in a "No Hiding Place" episode, playing opposite Raymond Francis (right).