Ex-singer is taking on aliens 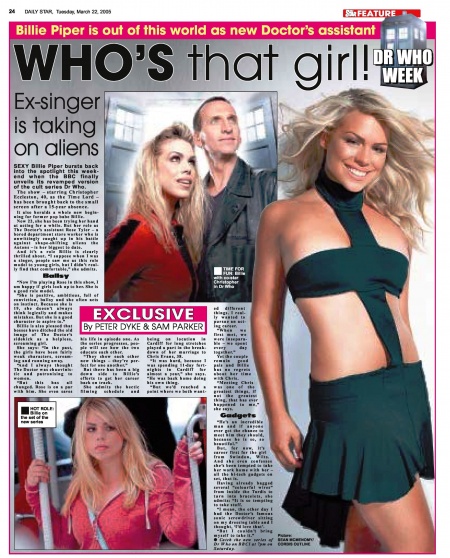 Billie Piper is out of this world as new Doctor's assistant

SEXY Billie Piper bursts back into the spotlight this weekend when the BBC finally unveils its revamped version of the cult series Dr Who.

The show — starring Christopher Eccleston, 40, as the Time Lord —has been brought back to the small screen after a 15-year absence.

Now 22, she has been trying her hand at acting for a while. But her role as The Doctor's assistant Rose Tyler — a bored department store worker who is unwittingly caught up in his battle against shape-shifting aliens the Autons — is her biggest to date.

And it's a role Billie is clearly thrilled about. "I suppose when I was a singer, people saw me as this role model to young girls, but I didn't really find that comfortable," she admits.

"Now I'm playing Rose in this show, I am happy if girls look up to her. She is a good role model.

"She is positive, ambitious, full of conviction, ballsy and she often acts on instinct. Because she is 19, she doesn't always think logically and makes mistakes. But she is a good character to aspire to."

Billie is also pleased that bosses have ditched the old image of The Doctor's sidekick as a helpless, screaming girl.

She says: "In the past, the girls have been fairly weak characters, screaming and running away.

"And I always thought The Doctor was chauvinistic and patronising to women.

"But this has all changed. Rose is on a par with him. She even saves his life in episode one. As the series progresses, people will see how the two educate each other.

"They show each other new things — they're perfect for one another."

But there has been a big down side to Billie's efforts to get her career back on track.

She admits the hectic filming schedule and

being on location in Cardiff for long stretches played a part in the breakdown of her marriage to Chris Evans, 38.

"It was hard, because I was spending 11-day fortnights in Cardiff for almost a year," she says. "He was back home doing his own thing.

"But we'd reached a point where we both wanted different things. I really wanted to pursue an acting career. "When we first met, we were inseparable — we spent every day together."

"He's an incredible man and if anyone ever got the chance to meet him they should, because he is so, so beautiful."

But, for now, it's career first for the girl from Swindon, Wilts. And she even confesses she's been tempted to take her work home with her —all the hi-tech gadgets on set, that is.

Having already bagged several "colourful wires" from inside the Tardis to turn into bracelets, she admits: "It is so tempting to take stuff.

"I mean, the other day I had the Doctor's famous sonic screwdriver sitting on my dressing table and I thought, 'I'd love that'. "But I couldn't bring myself to take it."

Catch the new series of Dr Who on BBC1 at 7pm on Saturday.

Caption: HOT ROLE: Billie on the set of the new series

Caption: TIME FOR FUN: Billie with co-star Christopher in Dr Who