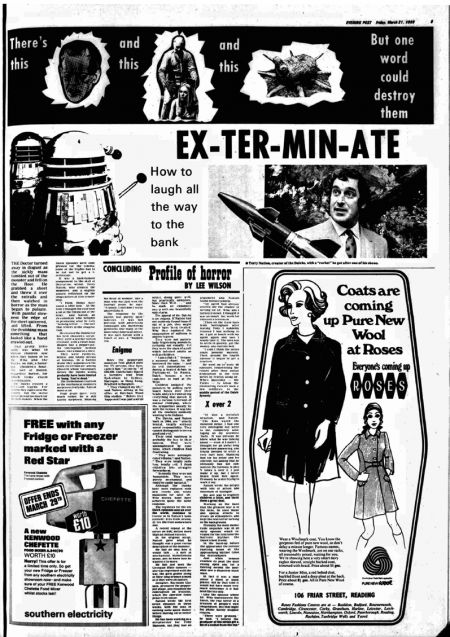 But one word could destroy them

How to laugh all the way to the bank

THE Doctor turned away in disgust as the sickly mass tumbled out of the monster and fell on the floor.

He grabbed a sheet and threw it over the entrails and then watched in horror as the mass began to pulsate. With painful slowness the edge of the sheet quivered, and lifted. From the throbbing mass something that looked like a hand crawled out.

That grisly little scene was what 10 million children saw when they tuned in to Dr Who and the Daleks on BBCs Saturday children's hour. In a sort of muted, suggestive horror, for which films claim X certificates.

The Daleks created a television legend. For months they captivated the country. But the skillful horror proved too much for film makers. When the Dalek episodes were compressed for the cinema, some of the frights had to be cut out to get a G certificate.

It was a back-handed compliment to the skill of 38-year-old writer, Terry Nation, who created the monsters, and a slightly absurd reflection on the illogicalities of film censorship.

"I think things have eased a little now. At the time I thought the cuts took a lot of the thrills out of the story," said Nation, an ex-comedian who delights in producing what he calls "lurking terror - the sort that festers in the imagination.

He created the Daleks for his first children's script. They were a science-fiction creature, with a robot body shaped like a pepper-pot. An 'intelligence' nestled inside, like a snail in a shell.

They were ruthless, brutal, and totally devoid of feelings. In a halting drone they popularised the word ex-ter-min-ate among children whose vocabulary before the Daleks would probably have been limited to 'bang, You're dead.'

The tremendous reaction to the mechanical monsters surprised everyone, Nation most of all.

Four years later, very much richer, he is still faintly surprised. Shaking his head in wonder, like a man who has just won the football pools, he says: "Frankly, I still don't ready understand it.

The response to the Daleks was purely spontaneous. It was not pre-sold, with advertising campaigns and marketing gimmicks, like many of the successful American series. It was, says Nation with a touch of awe, a "happening."

Since the pepper-pot monsters first glided onto the TV screens, they have earned him "in excess" of £50,001. Daleks have blazed a lucrative trail from Sydenham to Sydney, Harrogate to Hong Kong, Bradford to Bangkok.

"They changed my life," said Nation, sitting in his office at Boreham Wood film studios. " Before they happened I was just a script writer, doing quite well, but practically unknown. Since then. Well . . . " and he made an expansive sweep with one beautifully suited arm.

The appeal of the Daleks is an enigma. If Nation had not suddenly found himself out of a job, they might never have been created. Why they captured the imagination of millions is anyone's guess.

They were not particularly frightening monsters, certainly not visually. Yet they were the stars of a cult which infected adults as well as children.

"I-am-a-Dal-ek became a national chant. An MP borrowed the name and its evil connotations during a heated debate in Parliament. In Russia, Dalek, became a new expletive to hurl at the West.

Children imitated the monsters by pulling cardboard boxes over their heads, and ex-ter-min-at-ing everything that moved. It was a curious reversion of normal child-play, where the sympathies usually lie with the heroes. It was like all the cowboys suddenly wanting to be Indians.

The Daleks, said Nation back in 1964, are "utterly brutal, totally without moral responsibility. They cannot distinguish between good and evil."

Their total nastiness is probably the key to their success. They were uncomplicated by emotions, which children find frustrating.

"They were uncomplicated villains," said Nation. "They were totally ruthless, totally evil. I think children like straight-forwardness.

"Secondly they were not humanoids. They were purely mechanical, and could be easily imitated."

Although the Daleks have been replaced with new robots and weird mutations for later Dr. Who stories, none have achieved quite the same response.

The royalties for the old Dalek episodes sold all over the world, continue to trickle in to Nation's bank account: £12 from Arabia. £1 17s 10d from somewhere else.

A recent repeat of the series on netted more than six million viewers.

In his original script, Nation gave what he thought was a good verbal description of the monster.

He had an idea how it would talk ... a sort of mechanical, monotonous drone, and he knew now he wanted it to move.

He had just seen the Georgian State dancers - and was impressed with the way the girls glided along in their long dresses almost as it they were on castors.

Designer, Raymond Cussack, produced the pepperpot shape, and mounted the contraption on tricycles, which the operator could pedal from inside.

Nation wrote the first seven episodes in three weeks, with the idea of earning some quick money before moving on to better things.

He had been working as a scriptwriter for Tony Hancock, but they had an argument and Nation found himself jobless.

"My agent has already offered me the chance of writing for Dr. Who, and I turned it down. I thought it was an insult. Me. work for children's television.

"Then on the train back from Nottingham after leaving Tony I suddenly realised I had nothing to do. I got in touch with my agent again and said I would take it. The idea was to write in quickly, get the money, and run like hell.

"I didn't think the series could possibly succeed. Then, around the fourth episode it began to get a reaction.

He went on to write 40 episodes, resurrecting the robots after their initial destruction in the first series by craftily using Dr. Who's spaceship - the Tardis - to whisk the clamouring viewers back a few centuries, to the middle period of the Dalek dynasty.

"1t was a difficult situation," said Nation. "The kids watch the minutest detail. I had one very intelligent buy write to me. completely sabotaging all my scientific facts. It was obvious he knew what he was talking about - even if I didn't. I thought for an awful long time before answering, and finally decided to write a very curt note, thanking him for his letter and his interest. out adding that he obviously had not considered the formula M1 plus V times X over 2. I just make it up, but I never heard from him again. Probably he is still trying to work it out.

Nation wrote his scripts with lots action and minimum of dialogue.

His aim was to frighten children a little, and thrill them a great deal.

Working on the basis that the greatest fear is in the mind, he uses music and special effects to create an atmosphere, and kept the real terror lurking in the background.

Probably his most memorable sequence was in an early episode which revealed for the first time the horrible Slyther, the Dalek's best friend.

In the build-up before the appearance the curious rustling noise of the approaching Slyther filled the microphones.

Just when tension reached its peak the door swung open and for a fleeting second the audience saw a shapeless black mass.

In fact it was a man under a sheet of black plastic, but by that time it would not have made very much difference if it had been the tea-lady.

Like the episode where Dr. Who disembowels the Dalek, the real terror of a creation of people's own imagination. But that night his phone hardly stopped ringing.

"There were protests," he said. "I believe the producer of the series got a bit of a rocket from the top."

Caption: Terry Nation, creator of the Daleks, with a "rocket" he got after one of his shows.