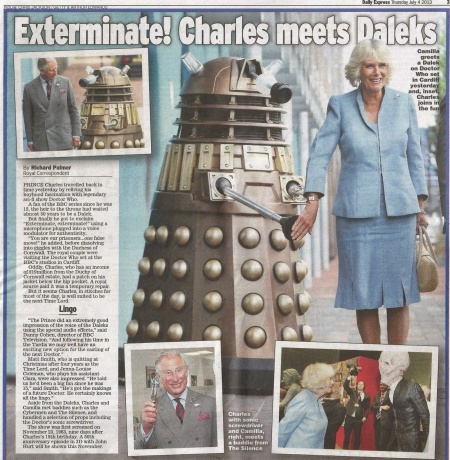 PRINCE Charles travelled back in time yesterday by reliving his boyhood fascination with legendary sci-fi show Doctor Who.

A fan of the BBC series since he was 15, the heir to the throne had waited almost 50 years to be s Dalek. But finally he got to exclaim "Exterminate, exterminate!" using a microphone plugged into a voice modulator for authenticity.

"You are our prisoners...one false move!" he added, before dissolving into giggles with the Duchess of Cornwall. The royal couple were ting the Doctor Who set at the BBC's studios in Cardiff.

Oddly, Charles, who has an income of £19million from the Duchy of Cornwall estate, had a patch on his jacket below the hip pocket. A royal source it was a temporary repair.

But it seems Charles, in stitches for most of the day, is well suited to be the next Time Lord.

"The Prince did an extremely good impression of the voice of the Daleks using the special audio effects," said Danny Cohen, director of BBC Television. "And following his time in the Tardis we may well have an exciting new option for the casting of the next Doctor."

Matt Smith, who is quitting at Christmas after four yews as the Time Lord, and Jenna-Louise Coleman, who plays his assistant Clara, were also impressed. "He told us he'd been a big fan since he was 15," said Smith. 'Tie's got the makings of a future Doctor. He certainly knows all the lingo."

Aside from the Daleks, Charles and Camilla met baddies such as the Cybermen and The Silence, and handled the sonic screwdriver.

The show was first screened on November 23, 1963, nine days after Charles's 15th birthday. A 50th anniversary episode in 3D with John Hurt will be shown this November.

Caption: Charles with sonic screwdriver and Camilla, right, meets a baddie from The Silence

Caption: Camilla greets a Dalek on Doctor Who set in Cardiff yesterday, and, inset, Charles joins the fun