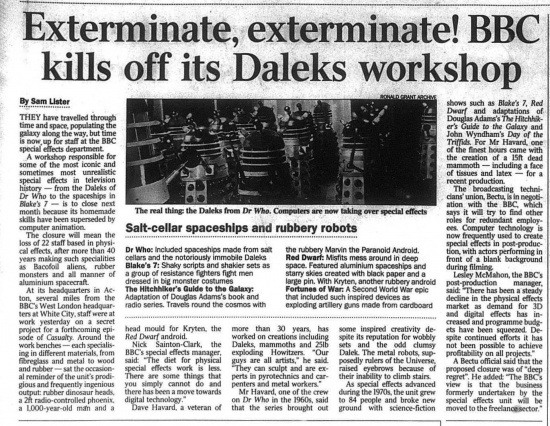 THEY have travelled through time and space, populating the galaxy along the way, but time is now up for staff at the BBC special effects department.

A workshop responsible for some of the most iconic and sometimes most unrealistic special effects in television his-tory -from the Daleks of Dr Who to the spaceships in Blake's 7 -is to close next month because its homemade skills have been superseded by computer animation.

The closure will mean the loss of 22 staff based in physical effects, after more than 40 years making such specialities as Bacofoil aliens, rubber monsters and all manner of aluminium spacecraft.

At its headquarters in Acton, several miles from the BBC's West London headquarters at White City, staff were at work yesterday on a secret project for a forthcoming episode of Casualty. Around the work benches -each specialising in different materials, from fibreglass and metal to wood and rubber -sat the occasional reminder of the unit's prodigious and frequently ingenious output: rubber dinosaur heads, a 2ft radio-controlled phoenix, a 1,000-year-old man and a head mould for Kryten, the Red Dwarf android.

Nick Sainton-Clark, the BBC's special effects manager, said: "The diet for physical special effects work is less. There are some things that you simply cannot do and there has been a move towards digital technology."

Dave Havard, a veteran of more than 30 years, has worked on creations including Daleks, mammoths and 25lb exploding Howitzers. "Our guys are all artists," he said. "They can sculpt and are experts in pyrotechnics and carpenters and metal workers."

Mr Havard, one of the crew on Dr Who in the 1960s, said that the series brought out some inspired creativity despite its reputation for wobbly sets and the odd clumsy Dalek. The metal robots, supposedly rulers of the Universe, raised eyebrows because of their inability to climb stairs.

As special effects advanced during the 1970s, the unit grew to 84 people and broke new ground with science-fiction shows such as Blake's 7, Red Dwarf and adaptations of Douglas Adams's The Hitchhiker's Guide to the Galaxy and John Wyndham's Day of the Triffids. For Mr Havard, one of the finest hours came with the creation of a 15ft dead mammoth -including a face of tissues and latex -for a recent production.

The broadcasting technicians' union, Bectu, is in negotiation with the BBC, which says it will try to find other roles for redundant employees. Computer technology is now frequently used to create special effects in post-production, with actors performing in front of a blank background during filming.

Lesley McMahon, the BBC's post-production manager, said: "There has been a steady decline in the physical effects market as demand for 3D and digital effects has increased and programme budgets have been squeezed.

Despite continued efforts it has not been possible to achieve profitability on all projects."

A Bectu official said that the proposed closure was of "deep regret". He added: "The BBC's view is that the business formerly undertaken by the special effects unit will be moved to the freelance sector."

Dr Who: Included spaceships made from salt cellars and the notoriously immobile Daleks

The Hitchhiker's Guide to the Galaxy: Adaptation of Douglas Adams's book and radio series. Travels round the cosmos with the rubbery Marvin the Paranoid Android.

Fortunes of War: A Second World War epic that included such inspired devices as exploding artillery guns made from cardboard

Caption: The real thing: the Daleks from Dr Who. Computers are now taking over special effects