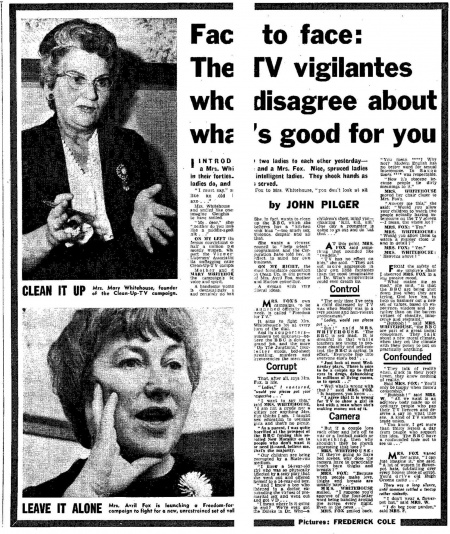 The TV vigilantes who disagree about what's good for you

I INTRODUCED two ladies to each other yesterday-— a Mrs. Whitehouse and a Mrs. Fox. Nice, spruced ladies in their forties ... intelligent ladies. They shook hands as ladies do, and ... served.

Mrs. Whitehouse and smiled like one imagine Genghis to have smiled.

ON MY LEFT the ferous convictions of half a million people, mostly women, who support the Viewer and Listeners' Association, its unflagging cause ... Clean-Up-TV campaign.

Mother and ... MARY WHITEHOUSE the campaign's ... voice and spirit.

A handsome woman ... is devastatingly ... and certainly no ...ban

She, in fact, wants to clean up the BBC, which she believes has a "kitchen sink bias "—too much sex, violence, despair and all that.

She wants a viewers' council to "help select" programmes, and the Corporation have told her, in effect, to mind her own business.

ON MY RIGHT, the most formidable opposition in Clean Up, in the person of Mrs. Avril Fox, mother and Harlow councillor.

A woman with very liberal ideas.

MRS. FOX'S own campaign, to be launched officially this week, is called "Freedom for TV."

It aims to fight Mrs. Whitehouse's lot at every turn of the dial.

And its supporters—numbers yet unknown--believe the BBC is doing a grand job, and the more "Up the Junctions," four-letter words, bed-sheet wrestling, murders and irreverencles the merrier.

That, after all, says Mrs. Fox, is life.

"Ladies," I ventured, "would you please put your respective ..."

"I want to say this." said MRS. WHITEHOUSE, "I am not a prude nor a killjoy nor anything Mrs. Fox thinks I am. I taught sex education to teenage girls and that's no picnic.

"As a parent, I was mete horrified at the prospect of the BBC forcing this so-called New Morality on to people who don't want it or need it—and, believe me, that's the majority.

"Our children are being corrupted by a State-run medium.

"I know a 14-year-old girl who was so physically affected by a sexy play that she went out and offered herself to a 14-year-old boy.

"And I know a boy who listened to a doctor expounding the virtues of premarital sex and went out and got VD ...

"I mean where is it going to end? We've even got the Daleks in Dr. Who—a children's show, mind you—chanting 'Kill, kill, kill.' One day a youngster is going to go out and do just that ..."

AT this point MRS. FOX said something that sounded like "twaddle."

"TV has no effect on kids," she said. " They act out more aggression in their own little fantasies than the most imaginative of Dr. Who's screenwriters could ever dream up.

"The only time rye seen a child distressed by T V was when Noddy was in a very sexless and non-violent predicament."

"Sex!" said MRS. WHITEHOUSE. "The BBC is sex mad, it is dreadful in that while teachers are trying to promote chastity and self-control, the BBC is saying. in effect. 'Everyone hop into everyone else's bed' ...

"Just look at most Wednesday plays. There is sure to be a couple up to their eyes in drugs. debauching in millions of living rooms, so to speak ..."

"I agree that it is wrong for TV to show a girl in bed with a man when she's making money out of it.

"But If a couple love each other and he's off to war or a football match or something, then why shouldn't they be shown expressing that love?"

MRS. WHITEHOUSE: "If they're going to have bed scenes, why does the camera have to practically touch bare thighs and breasts?"

MRS. FOX: "Because when people make love, thighs and breasts are usually bare ..."

MRS. WHITEHOUSE smiled. "I suppose you'd approve of the four-letter word being bandied around the screen every night. Even in the nes ..."

MRS. FOX smiled back. "You mean ***•? Why not? Modern English has no better word for sexual intercourse. In Saxon times **** was respectable.

"Now it's obscene because people tie dirty meanings to it."

"Answer me this," the said: " Would you allow your children to watch two people actually having intercourse on the T V screen-- I mean, the whole lot?

MRS. WHITEHOUSE "Would you allow them to watch a murder close up and in detail?"

FROM the safety of my umpire's chair I observed MRS. FOX in a less; passive mood.

"What makes me so mad," she said, "is that the B B C are being shot down just when they are trying, God love 'em, to help us hammer out a new set of values, based on experience, wisdom and joy rather than on the barren virtues of chastity, innocence and restraint."

"Rubbish!" said MRS. WHITEHOUSE, "the B B C are part of a great moral conspiracy. They talk about a new moral climate, when they set the climate with their policy to put on practically anything.

"They talk of reality then, stuck in their ivory tower, they know nothing of reality."

Said MRS. FOX: "You'll only be happy when there's censorship."

'Rubbish!" said MRS. W. "All we want is an advisory body made up of ordinary people who pay their T V licences and deserve a say in what they see. A kind of TV viewers trade union.

"You know, I get more than thirty letters a day from people who support this idea. The BBC have a confounded hide not to see us..."

MRS. FOX waved her arms. "I can just imagine it," she said. "A lot of women in flowerpot hats, tut-tutting over every holiest piece of script. You'd drive old Hugh Greene nutty ..."

Thera was a long silence, until someone rattled a teacup rather violently.

Caption: CLEAN IT UP Mrs. Mary Whitehouse, founder of the Clean-Up-TV campaign.

Caption: LEAVE IT ALONE Mrs. Avril Fox is launching a Freedom-for campaign to fight for a new, unrestrained set of values