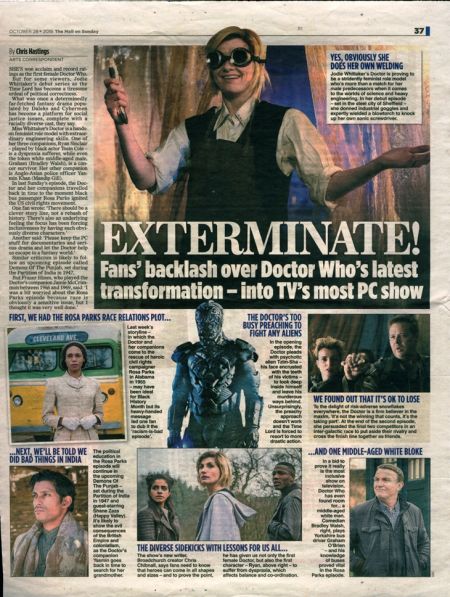 SHE'S won acclaim and record ratings as the first female Doctor Who. But for some viewers, Jodie Whittaker's debut series as the Time Lord has become a tiresome ordeal of political correctness.

What was once a determinedly far-fetched fantasy drama populated by Daleks and Cybermen has become a platform for social justice issues, complete with a racially diverse cast, they say.

Miss Whittaker's Doctor is a hands-on feminist role model with extraordinary engineering skills. One of her three companions, Ryan Sinclair - played by black actor Tosin Cole is a dyspraxia sufferer, while even the token white middle-aged male, Graham (Bradley Walsh), is a cancer survivor. Her other companion is Anglo-Asian police officer Yasmin Khan (Mandip Gill).

In last Sunday's episode, the Doctor and her companions travelled back in time to the moment black bus passenger Rosa Parks ignited the US civil rights movement.

One fan wrote: 'There should be a clever story line, not a rehash of history. There's also an underlying feeling the focus has been forcing inclusiveness by having such obviously diverse characters.'

Another said: 'Please keep the PC stuff for documentaries and serious drama and let the Doctor help us escape to a fantasy world.'

Similar criticism is likely to follow an upcoming episode called Demons Of The Punjab, set during the Partition of India in 1947.

But Frazer Hines, who played the Doctor's companion Jamie McCrimmon between 1966 and 1969, said: 'I was a bit worried about the Rosa Parks episode because race is obviously a sensitive issue, but I thought it was very well done.'

FIRST, WE HAD THE ROSA PARKS RACE RELATIONS PLOT...

Last week's storyline in which the Doctor and her companions come to the rescue of heroic civil rights campaigner Rosa Parks in Alabama in 1955 - may have been ideal for Black History Month but its heavy-handed message led one fan to dub it the 'racism-is-bad episode'.

THE DOCTOR'S TOO BUSY PREACHING TO FIGHT ANY ALIENS

In the opening episode, the Doctor pleads with psychotic alien Tzim-Sha his face encrusted with the teeth of his victims to look deep inside himself and leave his murderous ways behind. Unsurprisingly, the preachy approach doesn't work and the Time Lord is forced to resort to more drastic action.

WE FOUND OUT THAT IT'S OK TO LOSE

To the delight of risk-adverse snowflakes everywhere, the Doctor is a firm believer in the maxim, 'it's not the winning that counts, it's the taking part'. At the end of the second episode, she persuaded the final two competitors in an inter-galactic race to put aside their rivalry and cross the finish line together as friends.

..NEXT, THINGSE TOLD WE DID BAD IN INDIA

The political education in the Rosa Parks episode will continue in the upcoming Demons Of The Punjab set during the Partition of India in 1947 and guest-starring Shane Zaza (Happy Valley). It's likely to show the evil consequences of the British Empire and colonialism, as the Doctor's companion Yasmin goes back in time to search for her grandmother.

THE DIVERSE SIDEKICKS WITH LESSONS FOR US ALL...

The show's new writer, Broadchurch creator Chris Chibnall, says fans need to know that heroes can come in all shapes and sizes - and to prove the point, he has given us not only the first female Doctor, but also the first character - Ryan, above right - to suffer from dyspraxia, which affects balance and co-ordination.

...AND ONE MIDDLE-AGED WHITE BLOKE

In a bid to prove it realty is the most inclusive show on television, Doctor Who has even found room for... a middle-aged white man. Comedian Bradley Walsh, right, plays Yorkshire bus driver Graham O'Brien - and his knowledge of buses proved vital in the Rosa Parks episode.

YES, OBVIOUSLY SHE DOES HER OWN WELDING

Jodie Whittaker's Doctor is proving to be a stridently feminist role model who's more than a match for her male predecessors when it comes to the worlds of science and heavy engineering. In her debut episode - set in the steel city of Sheffield she donned industrial goggles and expertly wielded a blowtorch to knock up her own sonic screwdriver.