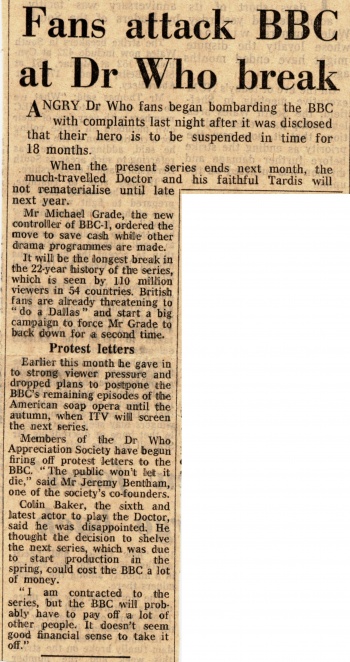 ANGRY Dr Who fans began bombarding the BBC with complaints last night after it was disclosed that their hero is to be suspended in time for 18 months.

When the present series ends next month, the much-travelled Doctor and his faithful Tardis will not rematerialise until late next year.

Mr Michael Grade, the new controller of BBC-1, ordered the move to save cash while other drama programmes are made.

It will be the longest break in the 22-year history of the series, which is seen by 110 million viewers in 54 countries. British fans are already threatening to "do a Dallas" and start a big, campaign to force Mr Grade to back down for a second time.

Earlier this month he gave in to strong viewer pressure and dropped plans to postpone the BBC's remaining episodes of the American soap opera until the autumn, when ITV will screen the next series.

Members of the Dr Who Appreciation Society have begun firing off protest letters to the BBC. " The public won't let it die," said Mr Jeremy Bentham, one of the society's 'co-founders.

Colin Baker, the sixth and latest actor to play the Doctor, said he was disappointed. He thought the decision to shelve the next series, which was due to start production in the spring, could cost the BBC a lot of money.

"I am contracted to the series, but the BBC will probably have to pay off a lot of other people. It doesn't seem good financial sense to take it off."