Trek fans beam in for Con 8 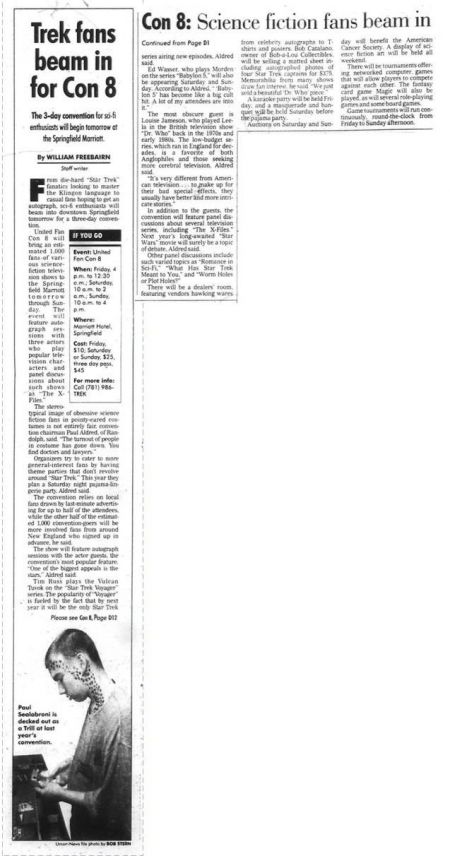 PHOTO From die-hard "Star Trek" fanatics looking to master the Klingon language to casual fans hoping to get an autograph, sci-fi enthusiasts will beam into downtown Springfield tomorrow for a three-day convention.

United Fan Con 8 will bring an estimated 1,000 fans of various science-fiction television shows to the Springfield Marriott tomorrow through Sunday. The event will feature autograph sessions with three actors who play popular television characters and panel discussions about such shows as "The X-Files."

The stereotypical image of obsessive science fiction fans in pointy-eared costumes is not entirely fair, convention chairman Paul Aldred, of Randolph, said. "The turnout of people in costume has gone down. You find doctors and lawyers."

Organizers try to cater to more general-interest fans by having theme parties that don't revolve around "Star Trek." This year they plan a Saturday night pajama-lingerie party, Aldred said.

The convention relies on local fans drawn by last-minute advertising for up to half of the attendees, while the other half of the estimated 1,000 convention-goers will be more involved fans from around New England who signed up in advance, he said.

The show will feature autograph sessions with the actor guests, the convention's most popular feature. "One of the biggest appeals is the stars," Aldred said.

Tim Russ plays the Vulcan Tuvok on the "Star Trek Voyager" series. The popularity of "Voyager" is fueled by the fact that by next year it will be the only Star Trek series airing new episodes, Aldred said.

Ed Wasser, who plays Morden on the series "Babylon 5," will also be appearing Saturday and Sunday. According to Aldred, "'Babylon 5' has become like a big cult hit. A lot of my attendees are into it."

The most obscure guest is Louise Jameson, who played Leela in the British television show "Dr. Who" back in the 1970s and early 1980s. The low-budget series, which ran in England for decades, is a favorite of both Anglophiles and those seeking more cerebral television, Aldred said.

"It's very different from American television ... to make up for their bad special effects, they usually have better and more intricate stories."

In addition to the guests, the convention will feature panel discussions about several television series, including "The X-Files." Next year's long-awaited "Star Wars" movie will surely be a topic of debate, Aldred said.

Other panel discussions include such varied topics as "Romance in Sci-Fi," "What Has Star Trek Meant to You," and "Worm Holes or Plot Holes?"

There will be a dealers' room, featuring vendors hawking wares from celebrity autographs to T-shirts and posters. Bob Catalano, owner of Bob-a-Lou Collectibles, will be selling a matted sheet including autographed photos of four Star Trek captains for $375. Memorabilia from many shows draw fan interest, he said. "We just sold a beautiful 'Dr. Who' piece."

A karaoke party will be held Friday, and a masquerade and banquet will be held Saturday before the pajama party.

Auctions on Saturday and Sunday will benefit the American Cancer Society. A display of science fiction art will be held all weekend.

There will be tournaments offering networked computer games that will allow players to compete against each other. The fantasy card game Magic will also be played, as will several role-playing games and some board games.

For more info: Call (781) 986-TREK(COLOR PHOTO) Paul Sealabroni is decked out as a Trill at last year's convention.P