Fans give Jodie the heave Who 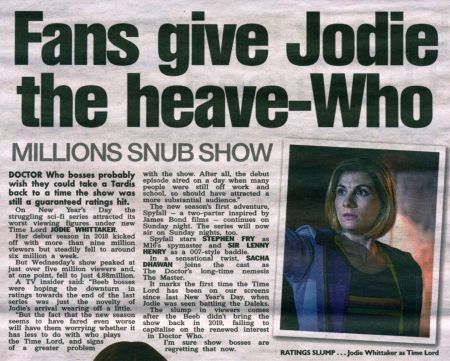 DOCTOR Who bosses probably wish they could take a Tardis back to a time the show was still a guaranteed ratings hit.

Her debut season in 2018 kicked off with more than nine million viewers but steadily fell to around six million a week.

But Wednesday's show peaked at just over five million viewers and, at one point, fell to just 4.88million.

A TV insider said: "Beeb bosses were hoping the downturn in ratings towards the end of the last series was just the novelty of Jodie's arrival wearing off a little.

"But the fact that the new season seems to have fared even worse will have them worrying whether it has less to do with who plays the Time Lord, and signs of a greater problem with the show. After all, the debut episode aired on a day when many people were still off work and school, so should have attracted a more substantial audience."

The new season's first adventure, Spyfall — a two-parter inspired by James Bond films — continues on Sunday night. The series will now air on Sunday nights, too.

In a sensational twist, SACHA DHAWAN joins the cast as The Doctor's long-time nemesis The Master.

It marks the first time the Time Lord has been on our screens since last New Year's Day, when Jodie was seen battling the Daleks.

The slump in viewers comes after the Beeb didn't bring the show back in 2019, failing to capitalise on the renewed interest in Doctor Who.

I'm sure show bosses are regretting that now.