Fans of the doctor know who they're looking for 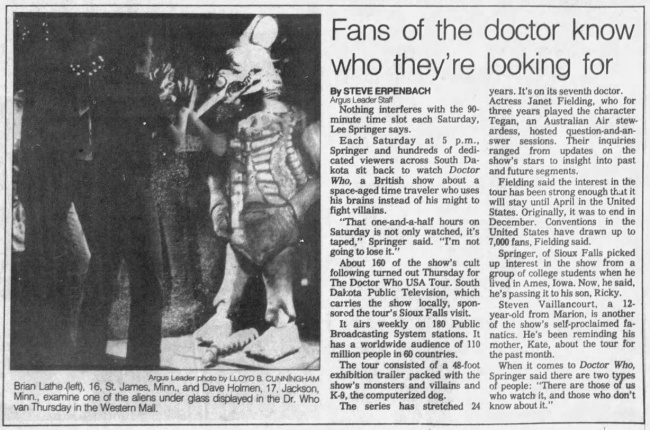 Nothing interferes with the 90-minute time slot each Saturday, Lee Springer says.

Each Saturday at 5 p.m., Springer and hundreds of dedicated viewers across South Dakota sit back to watch Doctor Who, a British show about a space-aged time traveler who uses his brains instead of his might to fight villains.

"That one-and-a-half hours on Saturday is not only watched, it's taped," Springer said. "I'm not going to lose it."

About 160 of the show's cult following turned out Thursday for The Doctor Who USA Tour. South Dakota Public Television, which carries the show locally, sponsored the tour's Sioux Falls visit.

It airs weekly on 180 Public Broadcasting System stations. It has a worldwide audience of 110 million people in 60 countries.

The tour consisted of a 48-foot exhibition trailer packed with the show's monsters and villains and K-9, the computerized dog.

The series has stretched 24 years. It's on its seventh doctor. Actress Janet Fielding, who for three years played the character Tegan, an Australian Air stewardess, hosted question-and-answer sessions. Their inquiries ranged from updates on the show's stars to insight into past and future segments.

Springer, of Sioux Falls picked up interest in the show from a group of college students when he lived in Ames, Iowa. Now, he said, he's passing it to his son, Ricky.

Steven Vaillancourt, a 12-year-old from Marion, is another of the show's self-proclaimed fanatics. He's been reminding his mother, Kate, about the tour for the past month.

When it comes to Doctor Who, Springer said there are two types of people: "There are those of us who watch it, and those who don't know about it."

Brian Lathe {left), 16, St. James, Minn., and Dave Holmen, 17, Jackson, Minn., examine one of the Miens under glass displayed in the Dr. Who van Thursday in the Western Mall.