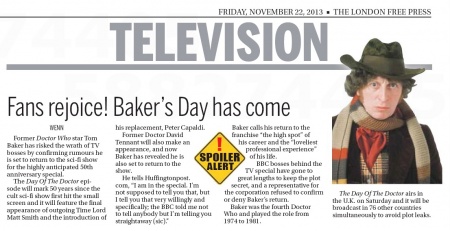 Former star Tom Baker has risked the wrath of TV bosses by confirming rumours he is set to return to the sci-fi show for the highly anticipated 50th anniversary special. The episode will mark 50 years since the cult sci-fi show first hit the small screen and it will feature the final appearance of outgoing Time Lord Matt Smith and the introduction of his replacement, Peter Capaldi. Former Doctor David Tennant will also make an appearance, and now Baker has revealed he is also set to return to the show. He tells Huffingtonpost. com, "I am in the special. I'm not supposed to tell you that, but I tell you that very willingly and specifically; the BBC told me not to tell anybody but I'm telling you straightaway (sic)." Baker calls his return to the franchise "the high spot" of his career and the "loveliest professional experience" of his life. BBC bosses behind the TV special have gone to great lengths to keep the plot secret, and a representative for the corporation refused to confirm or deny Baker's return. Baker was the fourth Doctor Who and played the role from 1974 to 1981, airs in the U.K. on Saturday and it will be broadcast in 76 other countries simultaneously to avoid plot leaks.

The Doctors are in the house ... Matt Smith, above left, David Tennant and John Hurt in the 50th anniversary special, The Day of the Doctor. David Bradley, left, as the actor who played the first Doctor in An Adventure in Space and Time.