Fear is their formula 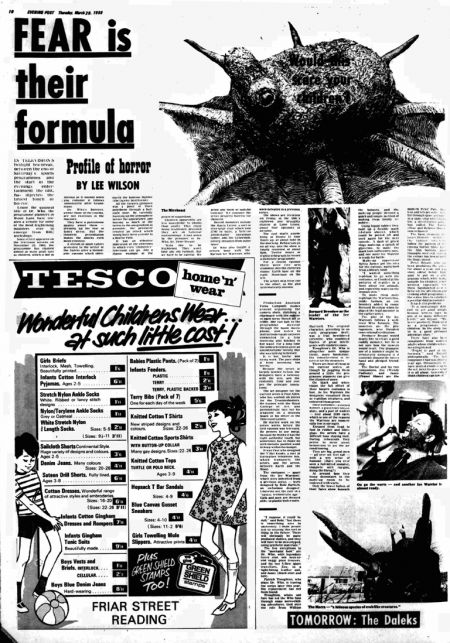 Fear is their formula

Profile of horror by Lee Wilson

In television's twilight, between the end of Saturday's sports programmes and the start of evenings entertainment, the BBC has injected the tiniest touch of horror.

Under the quizzical title of Dr. Who, the programme planners in Wood Lane have created a vehicle for some of the most frightening monsters ever to emerge from BBC workshops.

Since it first appeared on the television screens on November 23, 1963, the programme has claimed almost as many adult fans as children, which is not so curious as it sounds when you consider it follows immediately after Grandstand.

Dr. Who's horrors, unlike those of the cinema, are not exercises in the macabre.

They have a pantomime quality about them - dressing up the fear in fancy dress. But the innocent presentation makes the shocks even more effective.

All the viewers glimpsed was a piece of black polythene through a half-open door. By carefully building up the atmosphere before the appearance, and leaving as much of the terror to imagination as possible, the producer created an effect which would have been a credit to a Horror Film.

It was an effective indication of the extremes to which even "children's" television can go. And a classic example of the power of suggestion.

Children, apparently, are less susceptible to shocks than adults. They enjoy being frightened, provided they are in familiar surroundings. A fact noted by the producer of Dr. Who, Mr. Peter Bryant.

"Kids like to be frightened. They won't take any old rubbish. But we have to be careful. We avoid any form of sadistic violence. We consider the series properly horrific for children."

Recent monsters include the Macra Terror, a sort of over-large crab which cost £700 to build, a Yeti (of abominable snowman fame), and the Cybermen, silvery invaders from outer space.

Dr. Who also fought a return bout with the Martian ice warriors, who were defeated in a previous series.

The shows are recorded on Friday in BBC's cluttered and draughty studios at Lime Grove, about four episodes in advance.

The cast starts assembling in studio D, four floors up, and about nine in the morning. Rehearsals go on all day, and the show is finally recorded at about 8pm. Twelve hours of frantic rehearsals to record a 25-minute programme.

For a recent episodethere were five sets crammed into the cluttered studio. Earth base on the right, Moon-base, left.

The actors skip from one to the other, as the plot systematically unfolds.

Production assistant Fiona Campbell dashes around organising the camera shots, clutching a clipboard with the outline each scene ticked off in order. She can talk to the program directors through the boom microphone, and listen to instructions via an earpiece connected to a tiny receiving unit hitched to her waist. For a long time the unheard replies gave an uncomfortable feeling that she was talking to herself.

Is hot, hectic, and tiring work. The pace stops it from becoming too boring.

Because the series is largely science fiction, the designers have a field-day with the sets, and the costumes time and cost are the principle limitations.

The set designer for the current series is Paul Allen, who has worked on pieces for the Troubleshooters. He trained with the Royal College of Art, and painstakingly lays out his creations on a drawing board in his office in the Television Centre.

He started work on the series weeks before the first episode was televised. He prefers to use metal, because he thinks it has the right authentic touch, but sometimes has to make do with metallic painted wood to keep within his budget.

It was Paul who designed the T Mat kiosks, a sort of dial-a-place telephone box, which transports the actors, and the action, between Earth and the Moon.

The costumes - apart from the Ice Warriors', which were inherited from a previous series - were designed by Bobi Bartlett, an ex-fashion designer. Uniforms are the rule in a "casual technocratic age. Girls and men are dressed alike, in plastic boiler suits.

"I suppose it could be dull," said Bobi, "but there's something nice in uniformity. I think people will be wearing this sort of thing in the future. There will obviously be mass produce close, and they will have to be stereotyped, using synthetic materials."

The few exceptions to the "mechanic look" are Dr. Who, with legendary tailed coat, silk necktie and baggy plant trousers, and his two fellow space travellers, Zoe, in a tight-fitting leather suit, and Jamie (black shirt and kilt).

Patrick Troughton, who plays Dr. Who, is leaving the series later this year. His replacement has not been found.

Troughton, whose sad face has led the who fans through some nerve-chilling adventures, took over the role from William Hartnell. The original character, according to an early programme draft, was a frail bewildered eccentric, who combined flashes of great Intelligence with vindictiveness.

Troughton's Dr. Who is altogether more sympathetic, more boisterous. His vindictiveness is reserved for the monsters.

There are four of them in the current series, although by juggling them around a little the programme planners can give the Illusion of more.

On black and white vision the full effect of their bizarre costumes is lost. As Ice Warriors the designers visualize them as reptilian creatures, and colored them green.

Their costumes - a domed helmet, a glass-fibre breast-plate, and a pair of waders - cost about £100 each, which is one of the reasons the Warriors are numerically low in strength.

Encased from head to foot in rubber and fibreglass, the actors have a difficult time staying cool. During rehearsals they prefer to stroll about helmet-less to aid the air conditioning.

They are big, genial men - all over six feet tall - with a wry sense of humour. Have you ever seen a full-kitted monster, complete with ray-gun, doing the Shrug?)

At around 4pm they troop downstairs to the make-up room to be endowed with warts.

Only the lower halves of their faces show beneath the helmets, and the make-up people devised a quick and simple method of making them totally repulsive.

Using liquid rubber they build up a flexible mask (details above), which could be peeled off and used again for the next episode. A dash of green stage make-up, a splash of glycerine, to make the mask look sufficiently oozy, and one more Ice Warrior is ready for battle.

Make-up supervisor Sylvia James got the idea for the curious, warty look from a library book.

"I wanted something reptilian to go with the costumes, so I looked at the pictures of reptiles in a book about zoo animals and copied the scales on the animals skin."

To make them more reptilian the Warriors hiss, snake fashion, and embroidery added by comic Bernard Bresslaw when he played the lead monster in earlier series.

The plot of the Ice Warriors follows a well-tried Who formula. The monsters are the protagonists, who threaten conventional civilisation.

Producer Bryant would dearly like to create a good cuddly monster, but he's not sure how the viewers would react. The dramatic use of a monster might be irreparably damaged if it suddenly clasped the hero's hand and pledged friendship.

The Doctor and his two companions, Zoe (Wendy Padbury) and Jamie (Fraser Hines) are the modern Peter Pans. Ageless and irrepressible, they flip through space and time in a spaceship which looks like a street-corner police box called The Tardis (Time and Relative Dimension in Space()

The basic elements, the larger than life monsters, the fantasy [...] follow the pattern of the cinema horror films. Like the film horrors, good triumphs over evil even if the victory has to wait until the final episode.

Peter Bryant who has been producing the series for about a year and a story editor before that, aims to put on a programme which, while being suitable for children, is not written especially for them. Sandwiched as it is between the afternoon and evening adult programmes the series tries to establish a peculiar dual personality.

But it has led to problems.

"It is increasingly difficult to get good scripts because writers have to aim at so many different levels," said Bryant. " We never positively think of it as a programme for children. So the story has to be a good all-round adventure story."

There have also been complaints from worried adults whose children have been frightened.

"Fright it is part of the formula," said Bryant philosophically. "The last complaint I had was about a year ago. Occasionally we have invited children up to the set, to let them see what it is all about. Generally, I think children can take it.

Bernard Bresslaw as the leader of the ice warriors.

On go the warts - and another ice warrior is almost ready.

The Macra - "a hideous species of crab-like creatures."