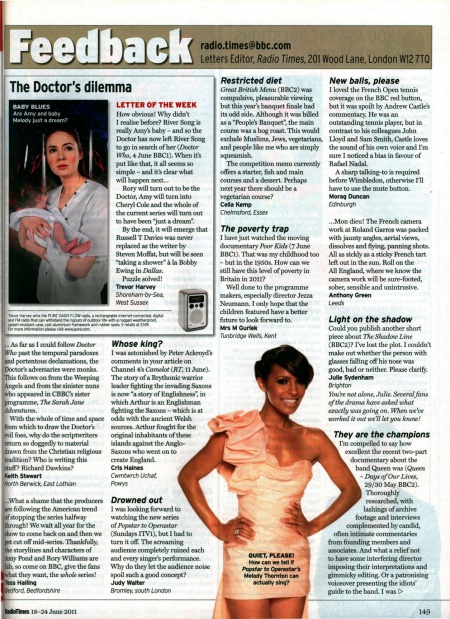 BABY BLUES Are Amy and baby Melody just a dream?

How obvious! Why didn't I realise before? River Song is really Amy's baby - and so the Doctor has now left River Song to go in search of her (Doctor Who, 4 June BBC1). When it's put like that, it all seems so simple - and it's clear what will happen next...

By the end, it will emerge that Russell T Davies was never replaced as the writer by Steven Moffat, but will be seen "taking a shower" á la Bobby Ewing in Dallas.

... As far as I could follow Doctor Who past the temporal paradoxes and portentous declamations, the Doctor's adversaries were monks. This follows on from the Weeping Angels and from the sinister nuns who appeared in CBBC's sister programme, The Sarah Jane Adventures.

With the whole of time and space from which to draw the Doctor's evil foes, why do the scriptwriters return so doggedly to material drawn from the Christian religious tradition? Who is writing this stuff? Richard Dawkins?

...What a shame that the producers are following the American trend of stopping the series halfway through! We wait all year for the show to come back on and then we get cut off mid-series. Thankfully, the storylines and characters of Amy Pond and Rory Williams are fab, so come on BBC, give the fans what they want, the whole series!