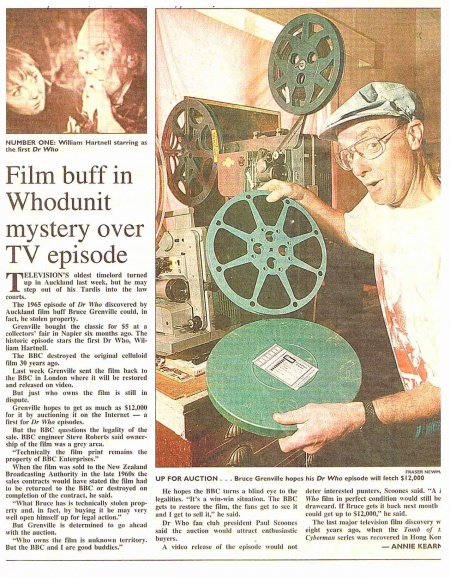 TELEVISION'S oldest timelord turned up in Auckland last week, but he may step out of his Tardis into the law courts.

The 1965 episode of Dr Who discovered by Auckland film buff Bruce Grenville could, in fact, be stolen property.

Grenville bought the classic for $5 at a collectors' fair in Napier six months ago. The historic episode stars the first Dr Who, William Hartnell.

The BBC destroyed the original celluloid film 30 years ago.

Last week Grenville sent the film back to the BBC in London where it will be restored and released on video.

But just who owns the film is still in dispute.

Grenville hopes to get as much as $12,000 for it by auctioning it on the Internet — a first for Dr Who episodes.

But the BBC questions the legality of the sale. BBC engineer Steve Roberts said ownership of the film was a grey area.

"Technically the film print remains the property of BBC Enterprises."

When the film was sold to the New Zealand Broadcasting Authority in the late 1960s the sales contracts would have stated the film had to be returned to the BBC or destroyed on completion of the contract, he said.

"What Bruce has is technically stolen property and, in fact, by buying it he may very well open himself up for legal action."

But Grenville is determined to go ahead with the auction.

"Who owns the film is unknown territory. But the BBC and I are good buddies."

He hopes the BBC turns a blind eye to the legalities. "It's a win-win situation. The BBC gets to restore the film, the fans get to see it and I get to sell it," he said.

A video release of the episode would not deter interested punters, Scoones said. "A Dr Who film in perfect condition would still be a drawcard. If Bruce gets it back next month could get up to $12,000," he said.

The last major television film discovery eight years ago, when the Tomb of the Cyberman series was recovered in Hong Kong.