Find adventure with Dr Who 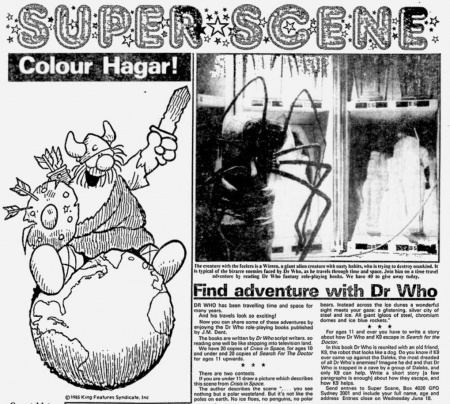 DR WHO has been travelling time and space for many years.

And his travels look so exciting!

Now you can share some of these adventures by enjoying the Dr Who role-playing books published by J.M. Dent.

The books are written by Dr Who script writers, so reading one will be like stepping onto television land We have 20 copies of Crisis in Space, for ages 10 and under and 20 copies of Search For The Doctor for ages 11 upwards.

There are two contests

If you are under 11 draw a picture which describes the scene from Crisis in Space.

The author describes the scene "...you see nothing but a polar wasteland. But it's not like the poles on earth. No ice floes, no penguins, no polar bears. Instead across the ice dunes a wonderful sight meets your gale: a glistening. saver city of steel and ice. All grant igloos of steel, chromium domes and ice blue rockets."

For ages 11 and over you have to write a story about how Dr Who and K9 escape in Search for the Doctor.

In this book Or Who is reunited with an old friend. K9, the robot that looks like a dog. Do you know if K9 ever came up against the Daleks, the most dreaded of all Dr Who's enemies? Imagine he did and that Dr Who is trapped on a cave by a group of Daleks and only K9 can help. Write a short story (a few paragraphs is enough) about how they escape, and how K9 helps.

Caption: The creature with the feelers is a Wirren, a giant alien creature with nasty habits, who is trying to destroy mankind. It is typical of the bizarre enemies faced by Dr Who, as he travels through time and space. Join him on a time travel adventure by reading Dr Who fantasy role-playing books. We have 40 to give away today.