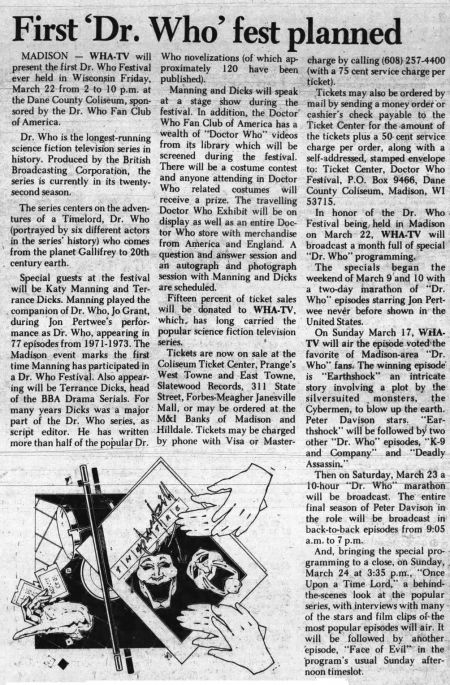 MADISON — WHA-TV will present the first Dr. Who Festival ever held in Wisconsin Friday, March 22 from 2 to 10 p.m. at the Dane County Coliseum, sponsored by the Dr. Who Fan Club of America.

Dr. Who is the longest-running science fiction television series in history. Produced by the British Broadcasting Corporation, the series is currently in its twenty-second season.

The series centers on the adventures of a Timelord, Dr. Who (portrayed by six different actors in the series' history) who comes from the planet Gallifrey to 20th century earth.

Special guests at the festival will be Katy Manning and Terrance Dicks. Manning played the companion of Dr. Who, Jo Grant, during Jon Pertwee's performance as Dr. Who, appearing in 77 episodes from 1971-1973. The Madison event marks the first time Manning has participated in a Dr. Who Festival. Also appearing will be Terrance Dicks, head of the BBA Drama Serials. For many years Dicks was a major part of the Dr. Who series, as script editor. He has written more than half of the popular Dr. Who novelizations (of which approximately 120 have been published).

Manning and Dicks will speak at a stage show during the festival. In addition, the Doctor' Who Fan Club of America has a wealth of "Doctor Who" videos from its library which will be screened during the festival. There will be a costume contest and anyone attending in Doctor Who related costumes will receive a prize. The travelling Doctor Who Exhibit will be on display as well as an entire Doctor Who store with merchandise from America and England. A question and answer session and an autograph and photograph session with Manning and Dicks are scheduled.

Fifteen percent of ticket sales will be donated to WHA-TV, which has long carried the popular science fiction television series.

Tickets are now on sale at the Coliseum Ticket Center, Prange's West Towne and East Towne, Slatewood Records, 311 State Street, Forbes-Meagher Janesville Mall, or may be ordered at the M&I Banks of Madison and Hilldale. Tickets may be charged by phone with Visa or Mastercharge by calling (608) 257-4400 (with a 75 cent service charge per ticket).

Tickets may also be ordered by mail by sending a money order or cashier's check payable to the Ticket Center for the amount of the tickets plus a 50 cent service charge per order, along with a self-addressed, stamped envelope to: Ticket Center, Doctor Who Festival, P.O. Box 9466, Dane County Coliseum, Madison, WI 53715.

In honor of the Dr. Who Festival being held in Madison on March 22, WHA-TV will broadcast a month full of special "Dr. Who" programming.

The specials began the weekend of March 9 and 10 with a two-day marathon of "Dr. Who" episodes starring Jon Pert-wee never before shown in the United States.

On Sunday March 17, WHA-TV will air the episode voted the favorite of Madison-area "Dr. Who" fans. The winning episode is "Earthshock" an intricate story involving a plot by the silver suited monsters, the Cybermen, to blow up the earth. Peter Davison stars. "Earthshock" will be followed by two other "Dr. Who" episodes, "K-9 and Company" and "Deadly Assassin."

Then on Saturday, March 23 10-hour "Dr. Who" marathon will be broadcast. The entire final season of Peter Davison in the role will be broadcast in back-to-back episodes from 9:05 a.m. to 7 p.m.

And, bringing the special programming to a close, on Sunday, March 24 at 3:35 p.m., "Once Upon a Time Lord," a behind-the-scenes look at the popular series, with interviews with many of the stars and film clips of the most popular episodes will air. It will be followed by another episode, "Face of Evil" in the program's usual Sunday afternoon timeslot.