Flashback in time to Dr Who 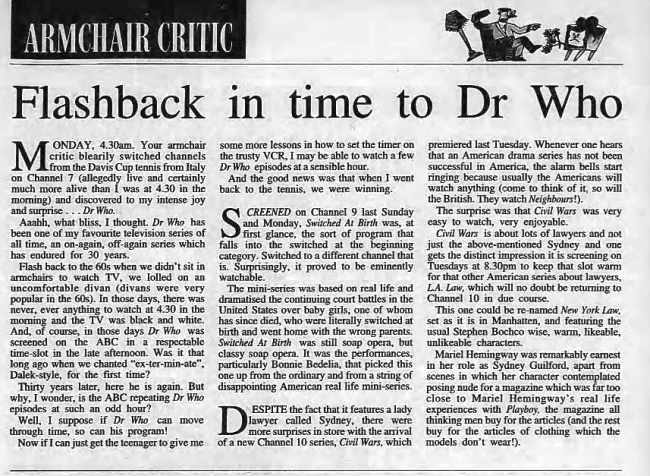 MONDAY, 4.30am. Your armchair critic blearily switched channels from the Davis Cup tennis from Italy on Channel 7 (allegedly live and certainly much more alive than I was at 4.30 in the morning) and discovered to my intense joy and surprise .. Dr Who.

Aaahh, what bliss, I thought. Dr Who has been one of my favourite television series of all time, an on-again, off-again series which has endured for 30 years.

Flash back to the 60s when we didn't sit in armchairs to watch TV, we lolled on an uncomfortable divan (divans were very popular in the 60s). In those days, there was never, ever anything to watch at 430 in the morning and the TV was black and white. And, of course, in those days Dr Who was screened on the ABC in a respectable time-slot in the late afternoon. Was it that long ago when we chanted "ex-ter-min-ate, Dalek-style, for the fast time?

Thirty years later, here he is again. But why, I wonder, is the ABC repeating Dr Who episodes at such an odd hour?

Well, I suppose if Dr Who can move through time, so can his program!

Now if I can just get the teenager to give me some more lessons in how to set the timer on the trusty VCR, I may be able to watch a few Dr Who episodes at a sensible hour.

And the good news was that when I went back to the tennis, we were winning.