Following "Dr. Who" for fun and adventure 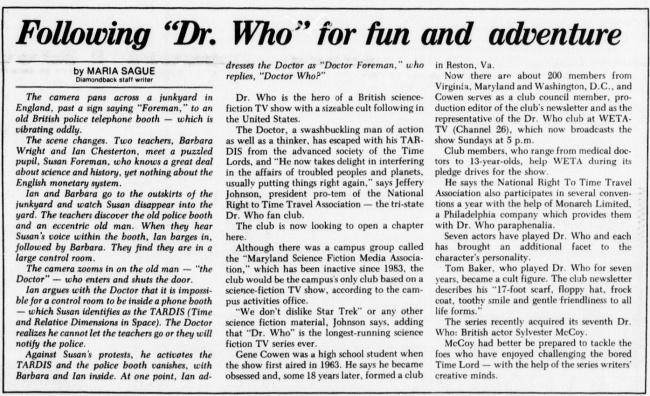 The camera pans across a junkyard in England, past a sign saying "Foreman," to an old British police telephone booth — which is vibrating oddly.

The scene changes. Two teachers, Barbara Wright and Ian Chesterton, meet a puzzled pupil, Susan Foreman, who knows a great deal about science and history, yet nothing about the English monetary system.

Ian and Barbara go to the outskirts of the junkyard and watch Susan disappear into the yard. The teachers discover the old police booth and an eccentric old man. When they hear Susan's voice within the booth, Ian barges in, followed by Barbara. They find they are in a large control room.

The camera zooms in on the old man — "the Doctor" — who enters and shuts the door.

Ian argues with the Doctor that it is impossible for a control room to be inside a phone booth — which Susan identifies as the TARDIS (Time and Relative Dimensions in Space). The Doctor realizes he cannot let the teachers go or they will notify the police.

Against Susan's protests, he activates the TARDIS and the police booth vanishes, with Barbara and Ian inside. At one point, Ian ad dresses the Doctor as "Doctor Foreman," who replies, "Doctor Who?"

Dr. Who is the hero of a British science-fiction TV show with a sizeable cult following in the United States.

The Doctor, a swashbuckling man of action as well as a thinker, has escaped with his TARDIS from the advanced society of the Time Lords, and "He now takes delight in interfering in the affairs of troubled peoples and planets, usually putting things right again," says Jeffery Johnson, president pro-tem of the National Right to Time Travel Association — the tri-state Dr. Who fan club.

The club is now looking to open a chapter here.

Although there was a campus group called the "Maryland Science Fiction Media Association," which has been inactive since 1983, the club would be the campus's only club based on a science-fiction TV show, according to the campus activities office.

Gene Cowen was a high school student when the show first aired in 1963. He says he became obsessed and, some 18 years later, formed a club in Reston, Va.

Now there are about 200 members from Virginia, Maryland and Washington, D.C., and Cowen serves as a club council member, production editor of the club's newsletter and as the representative of the Dr. Who club at WETA-TV (Channel 26), which now broadcasts the show Sundays at 5 p.m.

Club members, who range from medical doctors to 13-year-olds, help WETA during its pledge drives for the show.

He says the National Right To Time Travel Association also participates in several conventions a year with the help of Monarch Limited, a Philadelphia company which provides them with Dr. Who paraphenalia.

Seven actors have played Dr. Who and each has brought an additional facet to the character's personality.

McCoy had better be prepared to tackle the foes who have enjoyed challenging the bored Time Lord — with the help of the series writers' creative minds.