For Doctor Who fans, a guaranteed Whoot in D.M. 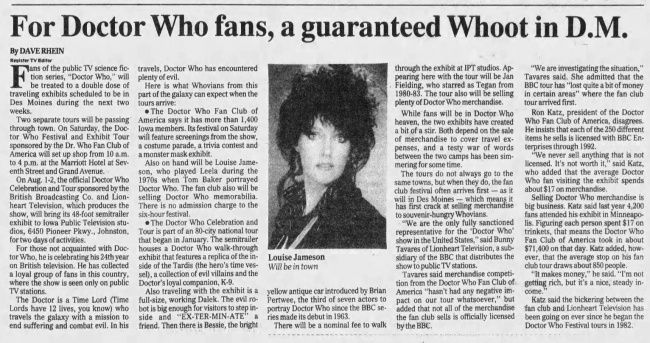 Fans of the public TV science fiction series, "Doctor Who," will be treated to a double dose of traveling exhibits scheduled to be in Des Moines during the next two weeks.

Two separate tours will be passing through town. On Saturday, the Doctor Who Festival and Exhibit Tour sponsored by the Dr. Who Fan Club of America will set up shop from 10 a.m. to 4 p.m. at the Marriott Hotel at Seventh Street and Grand Avenue.

On Aug. 1-2, the official Doctor Who Celebration and Tour sponsored by the British Broadcasting Co. and Lion-heart Television, which produces the show, will bring its 48-foot semitrailer exhibit to Iowa Public Television studios, 6450 Pioneer Pkwy., Johnston, for two days of activities.

For those not acquainted with Doctor Who, he is celebrating his 24th year on British television. He has collected a loyal group of fans in this country, where the show is seen only on public TV stations.

The Doctor is a Time Lord (Time Lords have 12 lives, you know) who travels the galaxy with a mission to end suffering and combat evil. In his travels, Doctor Who has encountered plenty of evil.

Here is what Whovians from this part of the galaxy can expect when the tours arrive:

• The Doctor Who Fan Club of America says it has more than 1,400 Iowa members. Its festival on Saturday will feature screenings from the show, a costume parade, a trivia contest and a monster mask exhibit.

Also on hand will be Louise Jameson, who played Leela during the 1970s when Tom Baker portrayed Doctor Who. The fan club also will be selling Doctor Who memorabilia. There is no admission charge to the six-hour festival.

• The Doctor Who Celebration and Tour is part of an 80-city national tour that began in January. The semitrailer houses a Doctor Who walk-through exhibit that features a replica of the inside of the Tardis (the hero's time vessel), a collection of evil villains and the Doctor's loyal companion, K-9.

Also traveling with the exhibit is a full-size, working Dalek. The evil robot is big enough for visitors to step inside and "EX-TER-MIN-ATE" a friend. Then there is Bessie, the bright yellow antique car introduced by Brian Pertwee, the third of seven actors to portray Doctor Who since the BBC series made its debut in 1963.

There will be a nominal fee to walk through the exhibit at IPT studios. Appearing here with the tour will be Jan Fielding, who starred as Tegan from 1980-83. The tour also will be selling plenty of Doctor Who merchandise.

While fans will be in Doctor Who heaven, the two exhibits have created a bit of a stir. Both depend on the sale of merchandise to cover travel expenses, and a testy war of words between the two camps has been simmering for some time.

The tours do not always go to the same towns, but when they do, the fan club festival often arrives first — as it will in Des Moines — which means it has first crack at selling merchandise to souvenir-hungry Whovians.

"We are the only fully sanctioned representative for the 'Doctor Who' show in the United States," said Bunny Tavares of Lionheart Television, a subsidiary of the BBC that distributes the show to public TV stations.

Tavares said merchandise competition from the Doctor Who Fan Club of America "hasn't had any negative impact on our tour whatsoever," but added that not all of the merchandise the fan club sells is officially licensed by the BBC.

"We are investigating the situation," Tavares said. She admitted that the BBC tour has "lost quite a bit of money in certain areas" where the fan club tour arrived first.

Ron Katz, president of the Doctor Who Fan Club of America, disagrees. He insists that each of the 250 different items he sells is licensed with BBC Enterprises through 1992.

"We never sell anything that is not licensed. It's not worth it," said Katz, who added that the average Doctor Who fan visiting the exhibit spends about $17 on merchandise.

Selling Doctor Who merchandise is big business. Katz said last year 4,200 fans attended his exhibit in Minneapolis. Figuring each person spent $17 on trinkets, that means the Doctor Who Fan Club of America took in about $71,400 on that day. Katz added, however, that the average stop on his fan club tour draws about 850 people.

Katz said the bickering between the fan club and Lionheart Television has been going on ever since he began the Doctor Who Festival tours in 1982.

Caption: Louise Jameson Will be in town