For local fans, it's a 'Doctor Who' exhibit 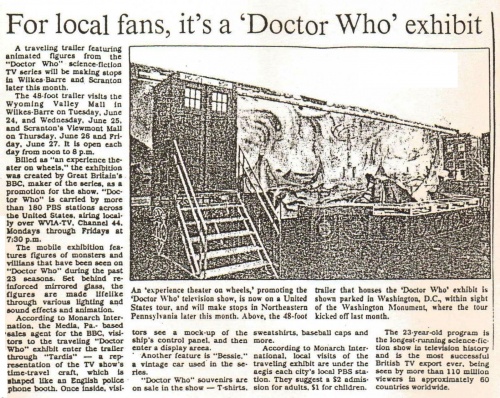 A traveling trailer featuring animated figures from the "Doctor Who science-fiction TV series will be making stops in Wilkes-Barre and Scranton later this month.

The 48-foot trailer visits the Wyoming Valley Mall in Wilkes-Barre on Tuesday, June 24, and Wednesday, June 25. and Scranton's Viewmont Mall on Thursday, June 26 and Friday, June 27. It is open each day from noon to 8 p.m.

Billed as "an experience theater on wheels," the exhibition was created by Great Britain's BBC, maker of the series, as a promotion for the show. "Doctor Who" is carried by more than 180 PBS stations across the United States, airing locally over WVIA-TV, Channel 44, Mondays through Fridays at 7:30 p.m.

The mobile exhibition features figures of monsters and villians that have been seen on "Doctor Who" during the past 23 seasons. Set behind reinforced mirrored glass, the figures are made lifelike through various lighting and sound effects and animation. According to Monarch Internation, the Media, Pa.-based sales agent for the BBC, visitors to the traveling "Doctor Who" exhibit enter the trailer through "Tardis" — a representation of the TV show's time-travel craft, which is shaped like an English police phone booth. Once inside, visitors see a mock-up of the ship's control panel, and then enter a display area.

Another feature is "Bessie," a vintage car used in the series.

"Doctor Who" souvenirs are on sale in the show — T-shirts, sweatshirts, baseball caps and more.

According to Monarch International, local visits of the traveling exhibit are under the aegis each city's local PBS station. They suggest a $2 admission for adults. $1 for children.

The 23-year-old program is the longest-running science-fiction show in television history and is the most successful British TV export ever, being seen by more than 110 million viewers in approximately 60 countries worldwide.

Caption: An 'experience theater on wheels,' promoting the 'Doctor Who' television show, is now on a United States tour, and will make stops in Northeastern Pennsylvania later this month. Above, the 48-foot trailer that houses the 'Doctor Who' exhibit is shown parked in Washington, D.C., within sight of the Washington Monument, where the tour kicked off last month.