From Dr Who to rebel Kennedy at the Proms 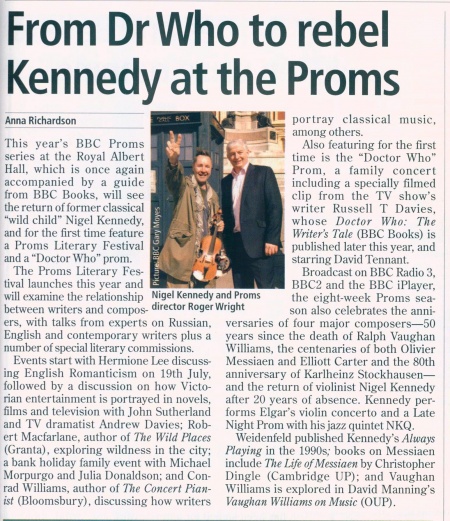 This year's BBC Proms series at the Royal Albert Hall, which is once again accompanied by a guide from BBC Books, will see the return of former classical "wild child" Nigel Kennedy, and for the first time feature a Proms Literary Festival and a "Doctor Who" prom.

The Proms Literary Festival launches this year and will examine the relationship between writers and composers, with talks from experts on Russian, English and contemporary writers plus a number of special literary commissions.

Events start with Hermione Lee discussing English Romanticism on 19th July, followed by a discussion on how Victorian entertainment is portrayed in novels, films and television with John Sutherland and TV dramatist Andrew Davies; Robert Macfarlane, author of The Wild Places (Granta), exploring wildness in the city; a bank holiday family event with Michael Morpurgo and Julia Donaldson; and Conrad Williams, author of The Concert Pianist (Bloomsbury), discussing how writers portray classical music, among others.

Also featuring for the first time is the "Doctor Who" Prom, a family concert including a specially filmed clip from the TV show's writer Russell T Davies, whose Doctor Who: The Writer's Tale (BBC Books) is published later this year, and starring David Tennant.

Broadcast on BBC Radio 3, BBC2 and the BBC iPlayer, the eight-week Proms season also celebrates the anniversaries of four major composers-50 years since the death of Ralph Vaughan Williams, the centenaries of both Olivier Messiaen and Elliott Carter and the 80th anniversary of Karlheinz Stockhausen—and the return of violinist Nigel Kennedy after 20 years of absence. Kennedy performs Elgar's violin concerto and a Late Night Prom with his jazz quintet NKQ.

Weidenfeld published Kennedy's Always Playing in the 1990s; books on Messiaen include The Life of Messiaen by Christopher Dingle (Cambridge UP); and Vaughan Williams is explored in David Manning's Vaughan Williams on Music (OUP).