From Gladiator to Gallifrey 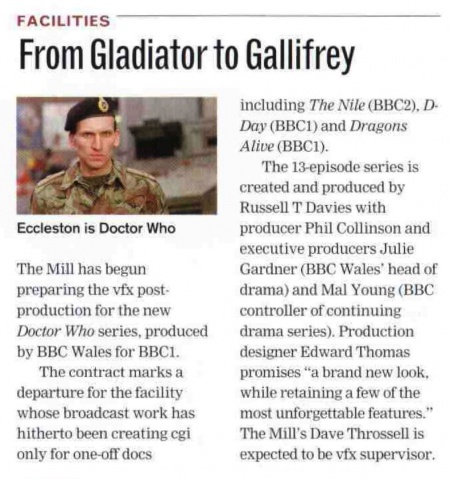 Eccleston is Doctor Who

The Mill has begun preparing the vfx post-production for the new Doctor Who series, produced by BBC Wales for BBC1.

The contract marks a departure for the facility whose broadcast work has hitherto been creating cgi only for one-off does including The Nile (BBC2). D-Day (BBC1) and Dragons Alive (BBC1).

The 13-episode series is created and produced by Russell T Davies with producer Phil Collinson and executive producers Julie Gardner (BBC Wales' head of drama) and Mal Young (BBC controller of continuing drama series). Production designer Edward Thomas promises "a brand new look, while retaining a few of the most unforgettable features." The Mill's Dave Throssell is expected to be vfx supervisor.