From chimney pot to Daleks; Dr. Who designer said to have been inspired by school roof line 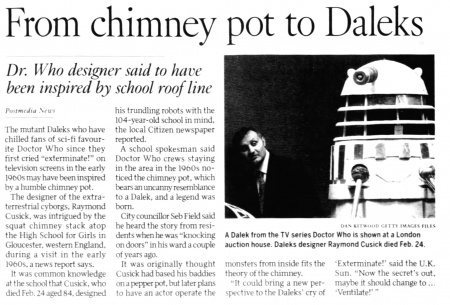 The mutant Daleks who have chilled fans of sci-fi favourite Doctor Who since they first cried "exterminate!" on television screens in the early 1960s may have been inspired by a humble chimney pot.

The designer of the extraterrestrial cyborgs, Raymond Cusick, was intrigued by the squat chimney stack atop the High School for Girls in Gloucester, western England, during a visit in the early 1960s, a news report says.

It was common knowledge at the school that Cusick, who died Feb. 24 aged 84, designed his trundling robots with the 104-year-old school in mind, the local Citizen newspaper reported.

A school spokesman said Doctor Who crews staying in the area in the 1960s noticed the chimney pot, which bears an uncanny resemblance to a Dalek, and a legend was born.

City councillor Seb Field said he heard the story from residents when he was "knocking on doors" in his ward a couple of years ago.

It was originally thought Cusick had based his baddies on a pepper pot, but later plans to have an actor operate the monsters from inside fits the theory of the chimney.

"It could bring a new perspective to the Daleks' cry of 'Exterminate!' said the U.K.

Caption: A Dalek from the TV series Doctor Who is shown at a London auction house. Daleks designer Raymond Cusick died Feb. 24.