Fun of the fair 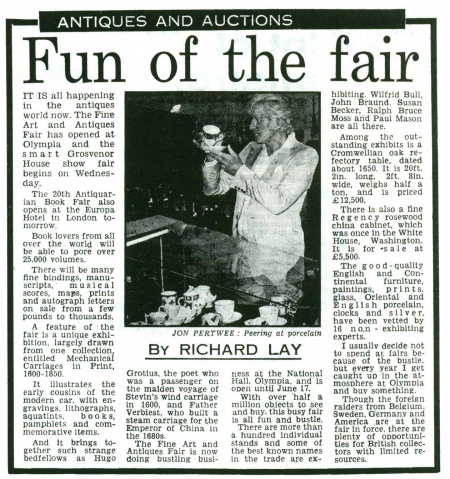 IT IS all happening in the antiques world now. The Fine Art and Antiques Fair has opened at Olympia and the s m art Grosvenor House show fair begins on Wednesday.

Book lovers from all over the world will be able to pore over 25.000 volumes.

There will be many fine bindings, manuscripts, musical scores, maps, prints and autograph letters on sale from a few pounds to thousands.

A feature of the fair is a unique exhibition, largely drawn from one collection, entitled Mechanical Carriages in Print, 1600-1850.

It illustrates the early cousins of the modern car, with engravings, lithographs, aquatints, books, pamphlets and commemorative items.

And it brings together such strange bedfellows as Hugo Grotius, the poet who was a passenger on the maiden voyage of Stevin's wind carriage in 1600, and Father Verbiest, who built a steam carriage for the Emperor of China in the 1680s.

The Fine Art and Antiques Fair is now doing bustling business at the National Hall, Olympia. and is open until June 17.

With over half a million objects to see and buy, this busy fair is all fun and bustle.

There are more than a hundred individual stands and some of the best known names in the trade are exhibiting. Wilfrid Bull, John Braund, Susan Becker, Ralph Bruce Moss and Paul Mason are all there.

There is also a fine Regency rosewood china cabinet, which was once in the White House, Washington. It is for sale at £5,500.

The good quality English and Continental furniture, paintings, prints, glass, Oriental and English porcelain, clocks and silver, have been vetted by 16 non-exhibiting experts.

I usually decide not to spend at fairs because of the bustle. but every year I get caught up in the atmosphere at Olympia and buy something.

Though the foreign raiders from Belgium, Sweden. Germany and America are at the fair in force, there are plenty of opportunities for British collectors with limited resources.