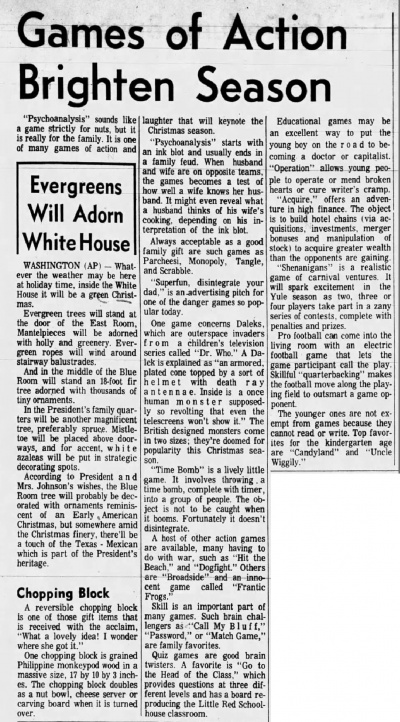 "Psychoanalysis" sounds like a game strictly for nuts, but it is really for the family. It is one of many games of action and laughter that will keynote the Christmas season.

"Psychoanalysis" starts with an ink blot and usually ends in a family feud. When husband and wife are on opposite teams, the games becomes a test of how well a wile knows her husband. It might even reveal what a husband thinks of his wife's cooking, depending on his interpretation of the ink blot. Always acceptable as a good family gift are such games as Parcheesi, Monopoly, Tangle, and Scrabble.

"Superfun, disintegrate your dad." is an advertising pitch for one of the danger games so popular today.

One game concerns Daleks, which are outerspace invaders from a Children's television series called "Dr. Who." A Dalek is explained as "an armored, plated cone topped by a sort of helmet with death ray antenna e. Inside is a once human monster supposedly so revolting that even the telescreens won't show it" The British designed monsters come in two sizes; they're doomed for popularity this Christmas season.

"Time Bomb" is a lively little game. It involves throwing . a time bomb, complete with timer, into a group of people. The object is not to be caught when it booms. Fortunately it doesn't disintegrate.

A host of other action games are available, many having to do with war, such as "Hit the Beach," and "Dogfight." Others -are "Broadside" and an lane—cent game called "Frantic Frogs."

Skill is an important part of many games. Such brain challengers as "Call My Bluff," "Password," or "Match Game," are family favorites.

Quiz games are good brain twisters. A favorite is "Go to the Head of the Class," which provides questions at three different levels and has a board reproducing the Little Red Schoolhouse classroom.

Educational games may be an excellent way to put the young boy on the road to becoming a doctor or capitalist. "Operation" allows young people to operate or mend broken hearts or cure writer's cramp. "Acquire." offers an adventure in high finance. The object is to build hotel chains (via acquisitions, investments, merger bonuses and manipulation of stock) to acquire greater wealth than the opponents are gaining. "Shenanigans" is a realistic game of carnival ventures. It will spark excitement in the Yule season as two, three or four players take part in a zany series of contests, complete with penalties and prizes.

Pro football can come into the living room with an electric football game that lets the game participant call the play. Skillful "quarterbacking" makes the football move along the playing field to outsmart a game opponent.

The younger ones are not exempt from games because they cannot read or write. Top favorites for the kindergarten age are "Candyland" and "Uncle Wiggily."