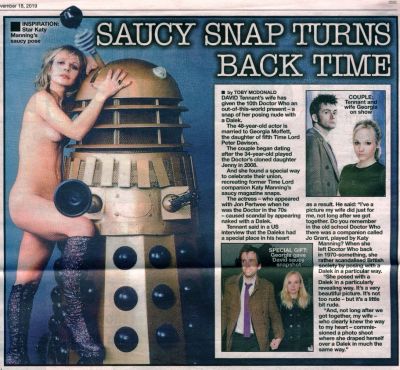 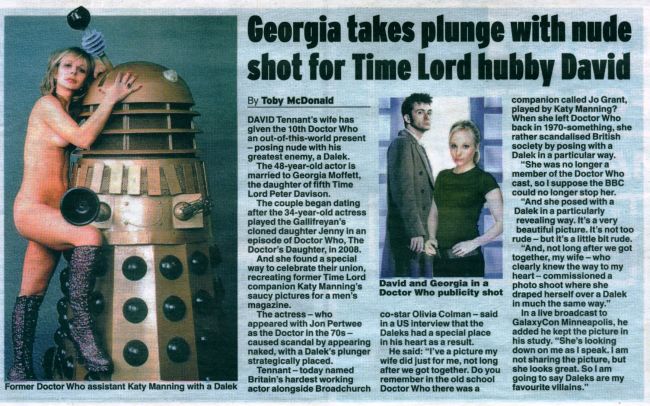 DAVID Tennant's wife has given the 10th Doctor Who an out-of-this-world present — posing nude with his greatest enemy, a Dalek.

The 48-year-old actor is married to Georgia Moffett, the daughter of fifth Time Lord Peter Davison.

The couple began dating after the 34-year-old actress played the Gallifreyan's cloned daughter Jenny in an episode of Doctor Who, The Doctor's Daughter, in 2008.

And she found a special way to celebrate their union, recreating former Time Lord companion Katy Manning's saucy pictures for a men's magazine.

The actress — who appeared with Jon Pertwee as the Doctor in the 70s — caused scandal by appearing naked, with a Dalek's plunger strategically placed.

Tennant—today named Britain's hardest working actor alongside Broadchurch co-star Olivia Colman — said in a US interview that the Daleks had a special place in his heart as a result.

He said: "I've a picture my wife did just for me, not long after we got together. Do you remember in the old school Doctor Who there was a companion called Jo Grant, played by Katy Manning? When she left Doctor Who back in 1970-something, she rather scandalised British society by posing with a Dalek in a particular way.

"She was no longer a member of the Doctor Who cast, so I suppose the BBC could no longer stop her.

"And she posed with a Dalek in a particularly revealing way. It's a very beautiful picture. It's not too rude— but it's a little bit rude.

"And, not long after we got together, my wife — who clearly knew the way to my heart — commissioned a photo shoot where she draped herself over a Dalek in much the same way."

In a live broadcast to GalaxyCon Minneapolis, he added he kept the picture in his study. "She's looking down on me as I speak. I am not sharing the picture, but she looks great. So I am going to say Daleks are my favourite villains."

Caption: Former Doctor Who assistant Katy Manning with a Dalek

Caption: David and Georgia in a Doctor Who publicity shot