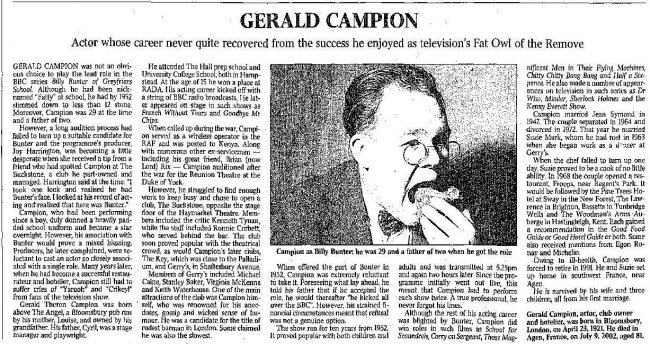 Actor whose career never quite recovered from the success he enjoyed as television's Fat Owl of the Remove.

GERALD CAMPION was not an obvious choice to play the lead role in the BBC series Billy Bunter of Greyfriars School. Although he had been nicknamed "Fatty" at school, he had by 1952 slimmed down to less than 12 stone. Moreover, Campion was 29 at the time and a father of two.

However, a long audition process had failed to turn up a suitable candidate for Bunter and the programme's producer, Joy Harrington, was becoming a little desperate when she received a tip from a friend who had spotted Campion at The Buckstone, a club he part-owned and managed. Harrington said at the time: "I took one look and realised he had Bunter's face. I looked at his record of acting and realised that here was Bunter."

Campion, who had been performing since a boy, duly donned a heavily padded school uniform and became a star overnight. However, his association with Bunter would prove a mixed blessing. Producers, he later complained, were reluctant to cast an actor so closely associated with a single role. Many years later, when he had become a successful restaurateur and hotelier, Campion still had to suffer cries of "Yarooh" and "Crikey!" from fans of the television show.

Gerald Theron Campion was born above The Angel, a Bloomsbury pub run by his mother, Louise, and owned by his grandfather. His father, Cyril, was a stage manager and playwright.

He attended The Hall prep school and University College School, both in Hampstead. At the age of 15 he won a place at RADA. His acting career kicked off with a string of BBC radio broadcasts. He later appeared on stage in such shows as French Without Tears and Goodbye Mr Chips.

When called up during the war, Campion served as a wireless operator in the RAF and was posted to Kenya. Along with numerous other ex-servicemen - including his great friend, Brian (now Lord) Rix - Campion auditioned after the war for the Reunion Theatre at the Duke of York.

However, he struggled to find enough work to keep busy and chose to open a club, The Buckstone, opposite the stage door of the Haymarket Theatre. Members included the critic Kenneth Tynan, while the staff included Ronnie Corbett, who served behind the bar. The club soon proved popular with the theatrical crowd, as would Campion's later clubs, The Key, which was close to the Palladium, and Gerry's, in Shaftesbury Avenue.

Members of Gerry's included Michael Caine, Stanley Baker, Virginia McKenna and Keith Waterhouse. One of the main attractions of the club was Campion himself, who was renowned for his anecdotes, gossip and wicked sense of humour. He was a candidate for the title of rudest barman in London. Some claimed he was also the slowest.

When offered the part of Bunter in 1952, Campion was extremely reluctant to take it. Foreseeing what lay ahead, he told his father that if he accepted the role, he would thereafter "be kicked all over the BBC". However, his strained fi-nancial circumstances meant that refusal was not a genuine option.

The show ran for ten years from 1952. It proved popular with both children and adults and was transmitted at 5.25pm and again two hours later. Since the programme initially went out live, this meant that Campion had to perform each show twice. A true professional, he never forgot his lines.

Although the rest of his acting career was blighted by Bunter, Campion did win roles in such films as School for Scoundrels, Carry on Sergeant, Those Magnificent Men in Their Flying Machines, Chitty Chitty Bang Bang and Half a Sixpence. He also made a number of appearances on television in such series as Dr Who, Minder, Sherlock Holmes and the Kenny Everett Show.

Campion married Jean Symond in 1947. The couple separated in 1964 and divorced in 1972. That year he married Suzie Mark, whom he had met in 1963 when she began work as a dancer at Gerry's.

When the chef failed to turn up one day, Suzie proved to be a cook of no little ability. In 1968 the couple opened a restaurant, Froops, near Regent's Park. It would be followed by the Pine Trees Hotel at Sway in the New Forest, The Lawrence in Brighton, Bassetts in Tunbridge Wells and The Woodman's Arms Auberge in Hastingleigh, Kent. Each gained a recommendation in the Good Food Guide or Good Hotel Guide or both. Some also received mentions from Egon Ronay and Michelin.

Owing to ill-health, Campion was forced to retire in 1991. He and Suzie set up home in southwest France, near Agen.

He is survived by his wife and three children, all from his first marriage.