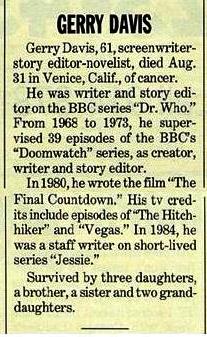 In 1980, he wrote the film "The Final Countdown." His tv credits include episodes of "The Hitchhiker" and "Vegas." In 1984, he was a staff writer on short-lived series "Jessie."

Survived by three daughters, a brother, a sister and two granddaughters.