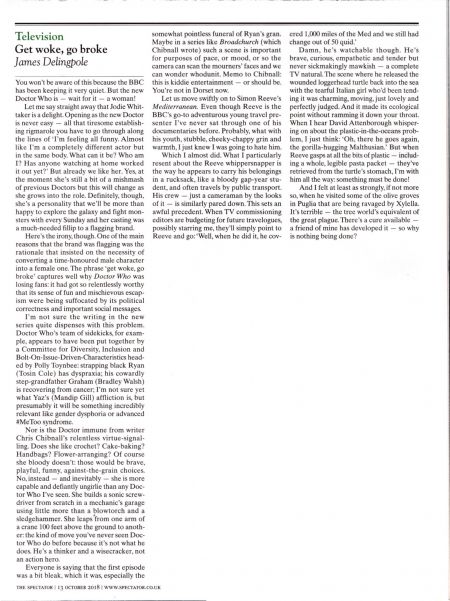 You won't be aware of this because the BBC has been keeping it very quiet. But the new Doctor Who is — wait for it — a woman!

Let me say straight away that Jodie Whittaker is a delight. Opening as the new Doctor is never easy — all that tiresome establishing rigmarole you have to go through along the lines of 'I'm feeling all funny. Almost like I'm a completely different actor but in the same body. What can it be? Who am I? Has anyone watching at home worked it out yet?' But already we like her. Yes, at the moment she's still a bit of a mishmash of previous Doctors but this will change as she grows into the role. Definitely, though, she's a personality that well be more than happy to explore the galaxy and fight monsters with every Sunday and her casting was a much-needed fillip to a flagging brand.

Here's the irony, though. One of the main reasons that the brand was flagging was the rationale that insisted on the necessity of converting a time-honoured male character into a female one. The phrase 'get woke, go broke' captures well why Doctor Who was losing fans: it had got so relentlessly worthy that its sense of fun and mischievous escapism were being suffocated by its political correctness and important social messages.

I'm not sure the writing in the new series quite dispenses with this problem. Doctor Who's team of sidekicks, for example, appears to have been put together by a Committee for Diversity, Inclusion and Bolt-On-Issue-Driven-Characteristics headed by Polly Toynbee: strapping black Ryan (Tosin Cole) has dyspraxia; his cowardly step-grandfather Graham (Bradley Walsh) is recovering from cancer; I'm not sure yet what Yaz's (Mandip Gill) affliction is, but presumably it will be something incredibly relevant like gender dysphoria or advanced #MeToo syndrome.

Nor is the Doctor immune from writer Chris Chibnall's relentless virtue-signalling. Does she like crochet? Cake-baking? Handbags? Flower-arranging? Of course she bloody doesn't: those would be brave, playful, funny, against-the-grain choices.

No, instead — and inevitably — she is more capable and defiantly ungirlie than any Doctor Who I've seen. She builds a sonic screwdriver from scratch in a mechanic's garage

using little more than a blowtorch and a sledgehammer. She leaps from one arm of a crane 100 feet above the ground to another the kind of move you've never seen Doctor Who do before because it's not what he does. He's a thinker and a wisecracker, not an action hero.

Everyone is saying that the first episode was a bit bleak, which it was, especially the somewhat pointless funeral of Ryan's gran. Maybe in a series like Broadchurch (which Chibnall wrote) such a scene is important for purposes of pace, or mood, or so the camera can scan the mourners' faces and we can wonder whodunit. Memo to Chibnall: this is kiddie entertainment — or should be. You're not in Dorset now.

Let us move swiftly on to Simon Reeve's Mediterranean. Even though Reeve is the BBC's go-to adventurous young travel presenter I've never sat through one of his documentaries before. Probably, what with his youth, stubble, cheeky-chappy grin and warmth, I just knew I was going to hate him.

Which I almost did. What I particularly resent about the Reeve whippersnapper is the way he appears to carry his belongings in a rucksack, like a bloody gap-year student, and often travels by public transport. His crew — just a cameraman by the looks of it — is similarly pared down. This sets an awful precedent. When TV commissioning editors are budgeting for future travelogues, possibly starring me, they'll simply point to Reeve and go: 'Well, when he did it, he covered 1,000 miles of the Med and we still had change out of 50 quid.'

Damn, he's watchable though. He's brave, curious, empathetic and tender but never sickmakingly mawkish — a complete TV natural. The scene where he released the wounded loggerhead turtle back into the sea with the tearful Italian girl who'd been tending it was charming, moving, just lovely and perfectly judged. And it made its ecological point without ramming it down your throat. When I hear David Attenborough whispering on about the plastic-in-the-oceans problem, I just think: 'Oh, there he goes again, the gorilla-hugging Malthusian' But when Reeve gasps at all the bits of plastic — including a whole, legible pasta packet — they've retrieved from the turtle's stomach, I'm with him all the way: something must be done!

And I felt at least as strongly, if not more so, when he visited some of the olive groves in Puglia that are being ravaged by Xylella. It's terrible — the tree world's equivalent of the great plague. There's a cure available —a friend of mine has developed it — so why is nothing being done?