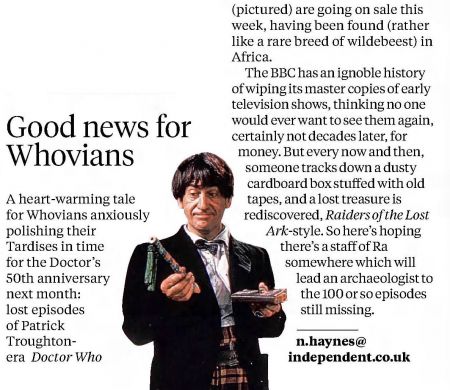 A heart-warming tale for Whovians anxiously polishing their Tardises in time for the Doctor's 50th anniversary next month: lost episodes of Patrick Troughton-era Doctor Who (pictured) are going on sale this week, having been found (rather like a rare breed of wildebeest) in Africa.

The BBC has an ignoble history of wiping its master copies of early television shows, thinking no one would ever want to see them again, certainly not decades later, for money. But every now and then, someone tracks down a dusty cardboard box stuffed with old tapes, and a lost treasure is rediscovered, Raiders of the Lost Ark-style. So here's hoping there's a staff of Ra somewhere which will lead an archaeologist to the 100 or so episodes still missing.