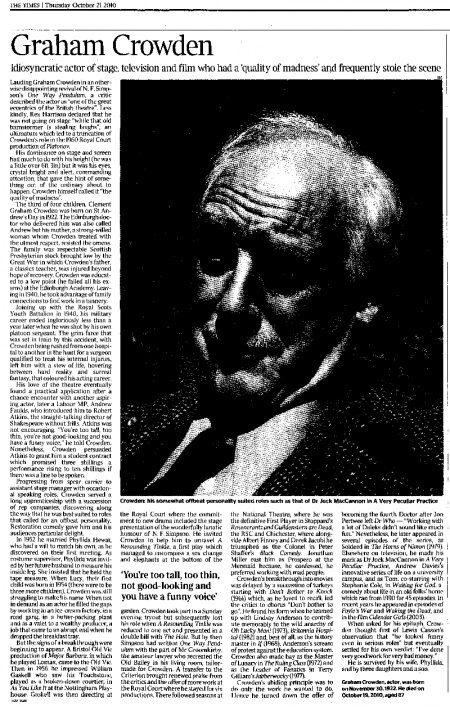 Idiosyncratic actor of stage, television and film who had a 'quality of madness' and frequently stole the scene

Lauding Graham Crowden in an otherwise disappointing revival of N. F. Simpson's One Way Pendulum, a critic de-scribed the actor as "one of the great eccentrics of the British theatre". Less kindly, Rex Harrison declared that he was not going on stage "while that old barnstormer is stealing laughs", an ultimatum which led to a truncation of Crowden's role in the 1960 Royal Court production of Platonov.

His dominance on stage and screen had much to do with his height (he was a little over 6ft 3in) but it was his eyes, crystal bright and alert, commanding attention, that gave the hint of something out of the ordinary about to happen. Crowden himself called it "the quality of madness".

The third of four children, Clement Graham Crowden was born on St Andrew's Day in 1922. The Edinburgh doctor who delivered him was also called Andrew but his mother, a strong-willed woman whom Crowden treated with the utmost respect, resisted the omens. The family was respectable Scottish Presbyterian stock brought low by the Great War in which Crowden's father, a classics teacher, was injured beyond hope of recovery. Crowden was educated to a low point (he failed all his exams) at the Edinburgh Academy. Leaving in 1940, he took advantage of family connections to find work in a tannery.

Joining up with the Royal Scots Youth Battalion in 1940, his military career ended ingloriously less than a year later when he was shot by his own platoon sergeant. The grim farce that was set in train by this accident, with Crowden being rushed from one hospital to another in the hunt for a surgeon qualified to treat his internal injuries, left him with a view of life, hovering between hard reality and surreal fantasy, that coloured his acting career.

His love of the theatre eventually found a practical application after a chance encounter with another aspiring actor, later a Labour MP, Andrew Faulds, who introduced him to Robert Atkins, the straight-talking director of Shakespeare without frills. Atkins was not encouraging. "You're too tall, too thin, you're not good-looking and you have a funny voice," he told Crowden. Nonetheless, Crowden persuaded Atkins to grant him a student contract which promised three shillings a performance rising to ten shillings if there was a line to be spoken.

Progressing from spear carrier to assistant stage manager with occasional speaking roles, Crowden served a long apprenticeship with a succession of rep companies, discovering along the way that he was best suited to roles that called for an offbeat personality. Restoration comedy gave him and his audiences particular delight.

In 1952 he married Phyllida Hewat, who had a will to match his own, as he discovered on their first meeting. As costume supervisor, Phyllida was invited by her future husband to measure his inside leg. She insisted that he held the tape measure. When Lucy, their first child was born in 1954 (there were to be three more children), Crowden was still struggling to make his name. When not in demand as an actor he filled the gaps by working in an ice-cream factory, in a road the breakfast tray.

But the signs of a breakthrough were beginning to appear. A Bristol Old Vic production of Major Barbara, in which he played Lomax, came to the Old Vic. Then in 1956 he impressed William Gaskell who saw his Touchstone, played as a broken-down courtier, in As You Like It at the Nottingham Playhouse.

Gaskell was then directing at the Royal Court where the commitment to new drama included the stage presentation of the wonderfully lunatic humour of N. F. Simpson. He invited Crowden to help him to unravel A Resounding Tinkle, a first play which managed to encompass a sex change and elephants at the bottom of the garden. Crowden took part in a Sunday evening tryout but subsequently lost his role when A Resounding Tinkle was reduced to one act and presented in a double bill with The Hole. But by then Simpson had written One Way Pendulum with the part of Mr Groomkirby, the amateur lawyer who recreated the Old Bailey in his living room, tailormade for Crowden. A transfer to the Criterion brought renewed praise from the critics and the offer of more work at the Royal Court where he stayed for six productions. There followed seasons at the National Theatre, where he was the definitive First Player in Stoppard's Rosencrantz and Guildenstern are Dead, the RSC and Chichester, where alongside Albert Finney and Derek Jacobi he triumphed as the Colonel in Peter Shaffer's Black Comedy. Jonathan Miller cast him as Prospero at the Mermaid be-cause, he confessed, he preferred working with mad people.

Crowden's breakthrough into movies was delayed by a succession of turkeys starting with Don't Bother to Knock (1961) which, as he loved to recall, led the critics to chorus "Don't bother to go". He found his form when he teamed up with Lindsay Anderson to contribute memorably to the wild anarchy of Oh Lucky Man! (1973), Britannia Hospital (1982) and, best of all, as the history master in If (1968), Anderson's scream of protest against the education system. Crowden also made hay as the Master of Lunacy in The Ruling Class (1972) and as the Leader of Fanatics in Terry Gilliam's Jabberwocky (1977).

Crowden's abiding principle was to do only the work he wanted to do. Hence he turned down the offer of becoming the fourth Doctor after Jon Pertwee left Dr Who - "Working with a lot of Daleks didn't sound like much fun." Nevetheless, he later appeared in several episodes of the series, as Soldeed in The Horns of Nimon (1979). Elsewhere on television, he made his mark as Dr Jock MacCannon in A Very Peculiar Practice, Andrew Davies's innovative series of life on a university campus, and as Tom, co-starring with Stephanie Cole, in Waiting for God, a comedy about life in an old folks' home which ran from 1990 for 45 episodes. In recent years he appeared in episodes of Foyle's War and Waking the Dead, and in the film Calendar Girls (2003).

When asked for his epitaph, Crowden thought first of Lewis Casson's observation that "he looked funny even in serious roles" but eventually settled for his own verdict: "I've done very good work for very bad money."

He is survived by his wife, Phyllida, and by three daughters and a son.

'You're too tall, too thin, not good-looking and you have a funny voice'