Gritty new sci-fi series is just what the Dr. Who ordered 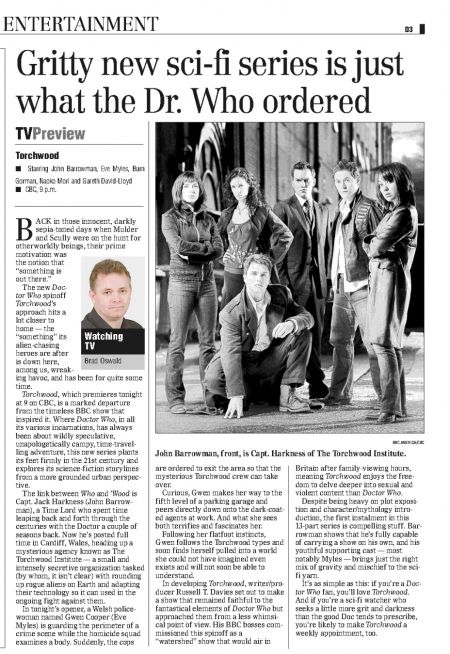 BACK in those innocent, darkly sepia-toned days when Mulder and Scully were on the hunt for otherworldly beings, their prime motivation was the notion that "something is out there." The new Doctor Who spinoff Torchwood's approach hits a lot closer to home — the "something" its alien-chasing heroes are after is down here, among us, wreaking havoc, and has been for quite some time.

Torchwood, which premieres tonight at 9 on CBC, is a marked departure from the timeless BBC show that inspired it. Where Doctor Who, in all its various incarnations, has always been about wildly speculative, unapologetically campy, time-travelling adventure, this new series plants its feet firmly in the 21st century and explores its science-fiction storylines from a more grounded urban perspective.

The link between Who and 'Wood is Capt. Jack Harkness (John Barrowman), a Time Lord who spent time leaping back and forth through the centuries with the Doctor a couple of seasons back. Now he's posted full time in Cardiff, Wales, heading up a mysterious agency known as The Torchwood Institute — a small and intensely secretive organization tasked (by whom, it isn't clear) with rounding up rogue aliens on Earth and adapting their technology so it can used in the ongoing fight against them.

In tonight's opener, a Welsh policewoman named Gwen Cooper (Eve Myles) is guarding the perimeter of a crime scene while the homicide squad examines a body. Suddenly, the cops are ordered to exit the area so that the mysterious Torchwood crew can take over.

Curious, Gwen makes her way to the fifth level of a parking garage and peers directly down onto the dark-coated agents at work. And what she sees both terrifies and fascinates her.

Following her flatfoot instincts, Gwen follows the Torchwood types and soon finds herself pulled into a world she could not have imagined even exists and will not soon be able to understand.

In developing Torchwood, writer/producer Russell T. Davies set out to make a show that remained faithful to the fantastical elements of Doctor Who but approached them from a less whimsical point of view. His BBC bosses commissioned this spinoff as a "watershed" show that would air in Britain after family-viewing hours, meaning Torchwood enjoys the freedom to delve deeper into sexual and violent content than Doctor Who.

Despite being heavy on plot exposition and character/mythology introduction, the first instalment in this 13-part series is compelling stuff. Barrowman shows that he's fully capable of carrying a show on his own, and his youthful supporting cast — most notably Myles — brings just the right mix of gravity and mischief to the sci-fi yarn.

It's as simple as this: if you're a Doctor Who fan, you'll love Torchwood. And if you're a sci-fi watcher who seeks a little more grit and darkness than the good Doc tends to prescribe, you're likely to make Torchwood a weekly appointment, too.