Guess Who's being sued? 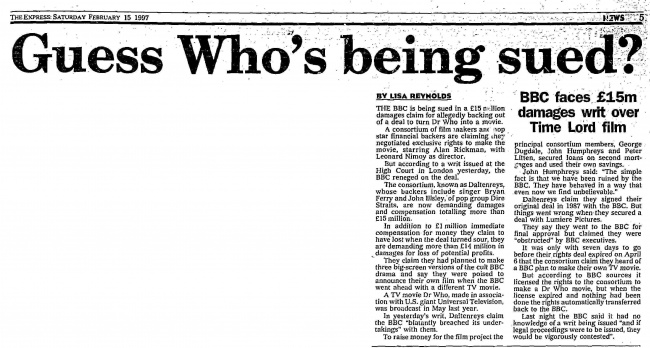 THE BBC is being sued in a £15 million damages claim for allegedly backing out of a deal to turn Dr Who into a movie.

A consortium of film makers and pop star financial backers are claiming they negotiated exclusive rights to make the movie, starring Alan Rickman, with Leonard Nimoy as director.

But according to a writ issued at the High Court in London yesterday, the BBC reneged on the deal.

The consortium, known as Daltenreys, whose backers include singer Bryan Ferry and John Illsley of pop group Dire Straits, are now demanding damages and compensation totalling more than £15 million.

In addition to £1 million immediate compensation for money they claim to have lost when the deal turned sour, they are demanding more than E14 million in damages for loss of potential profits.

They claim they had planned to make three big-screen versions of the cult BBC drama and say they were poised to announce their own film when the BBC went ahead with a different TV movie.

A TV movie Dr Who, made in association with U.S. giant Universal Television, was broadcast in May last year.

In yesterday's writ, Daltenreys claim the BBC "blatantly breached its undertakings" with them.

To raise money for the film project the principal consortium members, George Dugdale, John Humphreys and Peter Litten, secured loans on second mortgages and used their own savings.

John Humphreys said: "The simple fact is that we have been ruined by the BBC. They have behaved in a way that even now we find unbelievable."

Daltenreys claim they signed their original deal in 1987 with the BBC. But things went wrong when they secured a deal with Lumiere Pictures.

They say they went to the BBC for final approval but claimed they were "obstructed" by BBC executives.

It was only with seven days to go before their rights deal expired on April 6 that the consortium claim they heard of a BBC plan to make their own TV movie.

But according to BBC sources it licensed the rights to the consortium to make a Dr Who movie, but when the license expired and nothing had been done the rights automatically transferred back to the BBC.

Last night the BBC said it had no knowledge of a writ being issued "and if legal proceedings were to be issued, they would be vigorously contested".