Guess Who's on Xmas TV 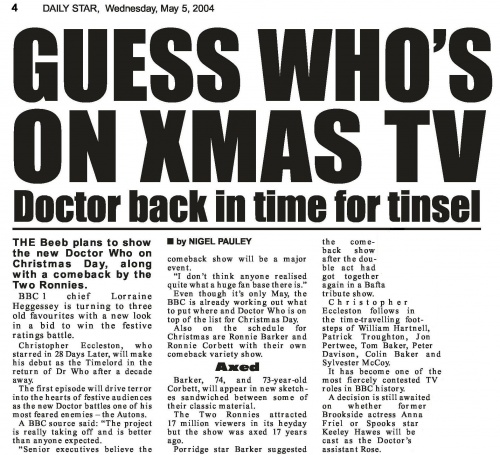 Doctor back in time for tinsel

THE Beeb plans to show the new Doctor Who on Christmas Day, along with a comeback by the Two Ronnies.

BBC 1 chief Lorraine Heggessey is turning to three old favourites with a new look in a bid to win the festive ratings battle.

Christopher Eccleston, who starred in 28 Days Later, will make his debut as the Timelord in the return of Dr Who after a decade away.

The first episode will drive terror into the hearts of festive audiences as the new Doctor battles one of his most feared enemies —the Autons.

A BBC source said: "The project is really taking off and is better than anyone expected.

"Senior executives believe the comeback show will be a major event.

"I don't think anyone realised quite what a huge fan base there is." Even though it's only May, the BBC is already working out what to put where and Doctor Who is on top of the list for Christmas Day. Also on the schedule for Christmas are Ronnie Barker and Ronnie Corbett with their own comeback variety show.

Barker, 74, and 73-year-old Corbett, will appear in new sketches sandwiched between some of their classic material.

The Two Ronnies attracted 17 million viewers in its heyday but the show was axed 17 years ago.

Porridge star Barker suggested the comeback show after the double act had got together again in a Bafta tribute show. Christopher Eccleston follows in the time-travelling footsteps of William Hartnell, Patrick Troughton, Jon Pertwee, Tom Baker, Peter Davison, Colin Baker and Sylvester McCoy. It has become one of the most fiercely contested TV roles in BBC history.

A decision is still awaited on whether former Brookside actress Anna Friel or Spooks star Keeley Hawes will be cast as the Doctor's assistant Rose.