Guess who has an eye on his family's future? 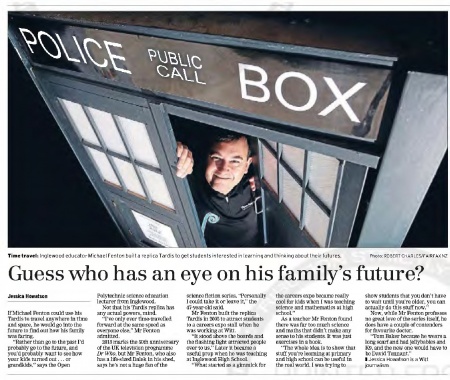 If Michael Fenton could use his Tardis to travel anywhere in time and space, he would go into the future to find out how his family was faring.

"Rather than go to the past I’d probably go to the future, and you’d probably want to see how your kids turned out . . . or grandkids," says the Open Polytechnic science education lecturer from Inglewood.

Not that his Tardis replica has any actual powers, mind.

"I’ve only ever time-travelled forward at the same speed as everyone else," Mr Fenton admitted.

2013 marks the 50th anniversary of the UK television programme Dr Who, but Mr Fenton, who also has a life-sized Dalek in his shed, says he’s not a huge fan of the science fiction series. "Personally I could take it or leave it," the 47-year-old said.

Mr Fenton built the replica Tardis in 2005 to attract students to a careers expo stall when he was working at Witt.

"It stood above the boards and the flashing light attracted people over to us." Later it became a useful prop when he was teaching at Inglewood High School.

"What started as a gimmick for the careers expo became really cool for kids when I was teaching science and mathematics at high school."

As a teacher Mr Fenton found there was far too much science and maths that didn’t make any sense to his students. It was just exercises in a book.

"The whole idea is to show that stuff you’re learning at primary and high school can be useful in the real world. I was trying to show students that you don’t have to wait until you’re older, you can actually do this stuff now."

Now, while Mr Fenton professes no great love of the series itself, he does have a couple of contenders for favourite doctor.

"Tom Baker because he wears a long scarf and had jellybabies and K9, and the new one would have to be David Tennant."

Caption: Time travel: Inglewood educator Michael Fenton built a replica Tardis to get students interested in learning and thinking about their futures