Gwen's Having an Alien Nipper! 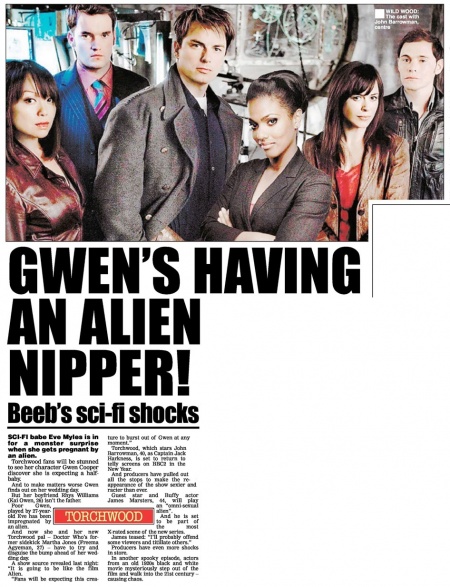 SCI-FI babe Eve Myles is in for a monster surprise when she gets pregnant by an alien.

Torchwood fans will be stunned to see her character Gwen Cooper discover she is expecting a half-baby.

And to make matters worse Gwen finds out on her wedding day.

But her boyfriend Rhys Williams (Kai Owen, 26) isn't the father.

Poor Gwen played by 27-year-old Eve has been impregnated by an alien.

And now she and her new Torchwood pal — Doctor Who's former sidekick Martha Jones (Freema Agyeman, 27) — have to try and disguise the bump ahead of her wedding day.

A show source revealed last night: "It is going to be like the film Alien.

"Fans will be expecting this crea ture to burst out of Gwen at any moment."

Torchwood, which stars John Barrowman, 40, as Captain Jack Harkness, is set to return to telly screens on BBC2 in the New Year.

And producers have pulled out all the stops to make the reappearance of the show sexier and racier than ever.

And he is set to be part of the most X-rated scene of the new series.

James teased: "I'll probably offend some viewers and titillate others."

Producers have even more shocks in store.

In another spooky episode, actors from an old 1920s black and white movie mysteriously step out of the film and walk into the 21st century — causing chaos.