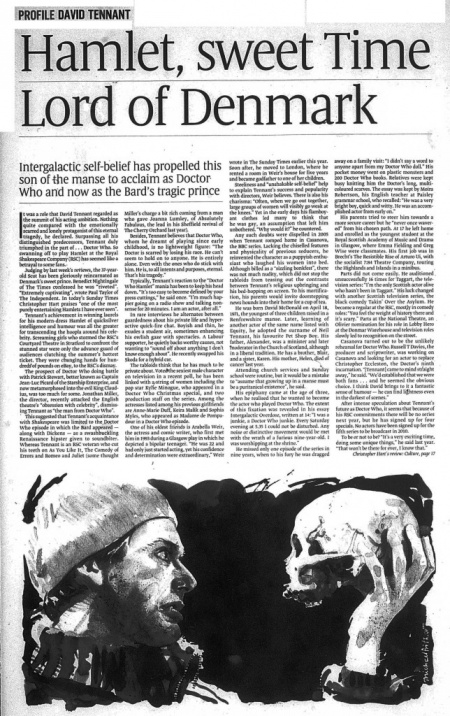 It was a role that David Tennant regarded as the summit of his acting ambition. Nothing quite compared with the emotionally scarred and lonely protagonist of this eternal tragedy, he declared. Surpassing all his distinguished predecessors, Tennant duly triumphed in the part of...Doctor Who. So swanning off to play Hamlet at the Royal Shakespeare Company (RSC) has seemed like a betrayal to some fans.

Judging by last week's reviews, the 37-year-old Scot has been gloriously reincarnated as Denmark's sweet prince. Benedict Nightingale of The Times confessed he was "riveted". "Extremely captivating", wrote Paul Taylor of The Independent. In today's Sunday Times Christopher Hart praises "one of the most purely entertaining Hamlets I have ever seen".

Tennant's achievement in winning laurels for his modern-dress Hamlet of quicksilver intelligence and humour was all the greater for transcending the hoopla around his celebrity. Screaming girls who stormed the RSC's Courtyard Theatre in Stratford to confront the stunned star were only the advance guard of audiences clutching the summer's hottest ticket. They were changing hands for hundreds of pounds on eBay, to the RSC's dismay.

The prospect of Doctor Who doing battle with Patrick Stewart, better known as Captain Jean-Luc Picard of the Starship Enterprise, and now metamorphosed into the evil King Claudius, was too much for some. Jonathan Miller, the director, recently attacked the English theatre's "obsession with celebrity", dismissing Tennant as "the man from Doctor Who".

This suggested that Tennant's acquaintance with Shakespeare was limited to the Doctor Who episode in which the Bard appeared - along with Dickens - as a swashbuckling Renaissance hipster given to soundbites. Whereas Tennant is an RSC veteran who cut his teeth on As You Like It, The Comedy of Errors and Romeo and Juliet (some thought Miller's charge a bit rich coming from a man who gave Joanna Lumley, of Absolutely Fabulous, the lead in his Sheffield revival of The Cherry Orchard last year).

Besides, Tennant believes that Doctor Who, whom he dreamt of playing since early childhood, is no lightweight figure: "The Doctor is scarred by losing his race. He can't seem to hold on to anyone. He is entirely alone. Even with the ones who do stick with him. He is, to all intents and purposes, eternal. That's his tragedy."

Typically, Tennant's reaction to the "Doctor Who Hamlet" mania has been to keep his head down. "It's too easy to become defined by your press cuttings," he said once. "I'm much happier going on a radio show and talking nonsense for 20 minutes. I am an actor, after all."

In rare interviews he alternates between guardedness about his private life and hyperactive quick-fire chat. Boyish and thin, he exudes a student air, sometimes enhancing his owlish gaze with spectacles. A Labour supporter, he quietly backs worthy causes, not wanting to "sound off about anything I don't know enough about". He recently swapped his Skoda for a hybrid car.

The tabloids think that he has much to be private about. Voted the sexiest male character on television in a recent poll, he has been linked with a string of women including the pop star Kylie Minogue, who appeared in a Doctor Who Christmas special, and two production staff on the series. Among the actresses listed among his previous girlfriends are Anne-Marie Duff, Keira Malik and Sophia Myles, who appeared as Madame de Pompadour in a Doctor Who episode.

One of his oldest friends is Arabella Weir, the actress and comic writer, who first met him in 1993 during a Glasgow play in which he depicted a bipolar teenager. "He was 22 and had only just started acting, yet his confidence and determination were extraordinary," Weir wrote in The Sunday Times earlier this year. Soon after, he moved to London, where he rented a room in Weir's house for five years and became godfather to one of her children.

Steeliness and "unshakable self-belief" help to explain Tennant's success and popularity with directors, Weir believes. There is also his charisma: "Often, when we go out together, large groups of women will visibly go weak at the knees." Yet in the early days his flamboyant clothes led many to think that he was gay, an assumption that left him unbothered. "Why would it?" he countered.

Any such doubts were dispelled in 2005 when Tennant romped home in Casanova, the BBC series. Lacking the chiselled features and physicality of previous seducers, he reinvented the character as a puppyish enthusiast who laughed his women into bed. Although billed as a "sizzling bonkfest", there was not much nudity, which did not stop the tabloids from teasing out the contrasts between Tennant's religious upbringing and his bed-hopping on screen. To his mortification, his parents would invite doorstepping news hounds into their home for a cup of tea.

He was born David McDonald on April 18, 1971, the youngest of three children raised in a Renfrewshire manse. Later, learning of another actor of the same name listed with Equity, he adopted the surname of Neil Tennant, his favourite Pet Shop Boy. His father, Alexander, was a minister and later moderator in the Church of Scotland, although in a liberal tradition. He has a brother, Blair, and a sister, Karen. His mother, Helen, died of cancer last year.

Attending church services and Sunday school were routine, but it would be a mistake to "assume that growing up in a manse must be a puritanical existence", he said.

His epiphany came at the age of three, when he realised that he wanted to become the actor who played Doctor Who. The extent of this fixation was revealed in his essay Intergalactic Overdose, written at 14: "I was a junkie, a Doctor Who junkie. Every Saturday evening at 5.35 I could not be disturbed. Any noise or distinctive movement would be met with the wrath of a furious nine-year-old. I was worshipping at the shrine."

He missed only one episode of the series in nine years, when to his fury he was dragged away on a family visit: "I didn't say a word to anyone apart from my Doctor Who doll." His pocket money went on plastic monsters and 200 Doctor Who books. Relatives were kept busy knitting him the Doctor's long, multicoloured scarves. The essay was kept by Moira Robertson, his English teacher at Paisley grammar school, who recalled: "He was a very bright boy, quick and witty. He was an accomplished actor from early on."

His parents tried to steer him towards a more secure career but he "never once wavered" from his chosen path. At 17 he left home and enrolled as the youngest student at the Royal Scottish Academy of Music and Drama in Glasgow, where Emma Fielding and Greg Wise were classmates. His first job was in Brecht's The Resistible Rise of Arturo Ui, with the socialist 7:84 Theatre Company, touring the Highlands and Islands in a minibus.

Parts did not come easily. He auditioned unsuccessfully 16 times for Taggart, the television series: "I'm the only Scottish actor alive who hasn't been in Taggart." His luck changed with another Scottish television series, the black comedy Takin' Over the Asylum. He became a regular at the RSC, mostly in comedy roles: "You feel the weight of history there and it's scary." Parts at the National Theatre, an Olivier nomination for his role in Lobby Hero at the Donmar Warehouse and television roles slowly led to recognition on the street.

Casanova turned out to be the unlikely rehearsal for Doctor Who. Russell T Davies, the producer and scriptwriter, was working on Casanova and looking for an actor to replace Christopher Eccleston, the Doctor's ninth incarnation. "(Tennant) came to mind straight away," he said. "We'd established that we were both fans...and he seemed the obvious choice. I think David brings to it a fantastic sense of humour - he can find lightness even in the darkest of scenes."

After intense speculation about Tennant's future as Doctor Who, it seems that because of his RSC commitments there will be no series next year, but he has signed up for four specials. No actors have been signed up for the fifth series to be broadcast in 2010.

To be or not to be? "It's a very exciting time, doing some unique things," he said last year. "That won't be there for ever, I know that."