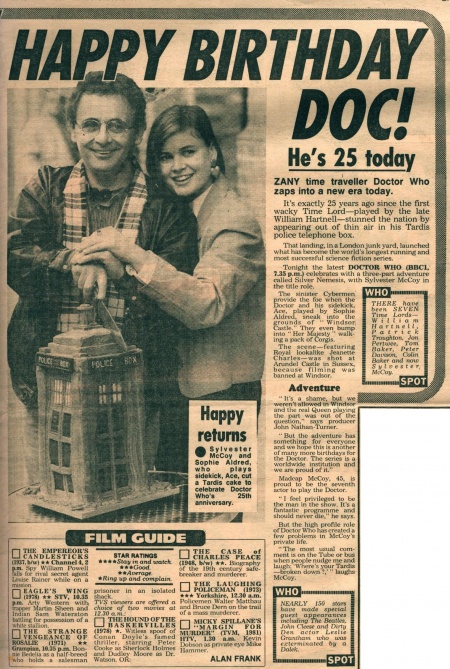 It's exactly 25 years ago since the first wacky Time Lord—played by the late William Hartnell—stunned the nation by appearing out of thin air in his Tardis police telephone box.

That landing, in a London junk yard, launched what has become the world's longest running and most successful science fiction series.

Tonight the latest DOCTOR WHO (BBC1,' 7.35 p.m.) celebrates with a three-part adventure called Silver Nemesis, with Sylvester McCoy in the title role.

The sinister Cybermen provide the foe when the Doctor and his sidekick, Ace, played by Sophie Aldred, sneak into the grounds of " Windsor; Castle." They even bump into " Her Majesty " walking a pack of Corgis.

The scene—featuring Royal lookalike Jeanette Charles—was shot at Arundel Castle in Sussex, because filming was banned at Windsor.

" It's a shame, but we weren't allowed in Windsor and the real Queen playing the part was out of the question," says producer John Nathan-Turner.

" But the adventure has something for everyone and we hope this is another of many more birthdays for the Doctor. The series is a worldwide institution and we are proud of it."

Madcap McCoy, 45, is proud to be the seventh actor to play the Doctor.

" I feel privileged to be the man in the show. It's a fantastic programme and should never die," he says.

But the high profile role of Doctor Who has created a few problems in McCoy's private life.

" The most usual comment is on the Tube or bus when people nudge me and laugh: 'Where's your Tardis —broken down '?,' " laughs McCoy.

NEARLY 150 stars have made special guest appearances including The Beatles, John Cleese and Dirty Den actor Leslie Grantham who was exterminated by a Dalek.