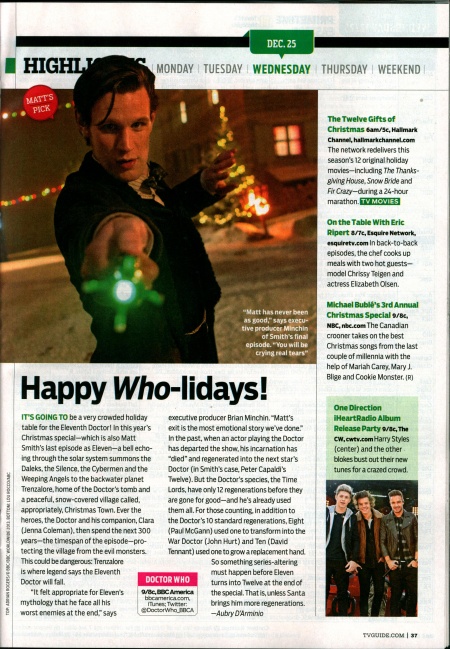 IT'S GOING TO be a very crowded holiday table for the Eleventh Doctor! In this year's Christmas special—which is also Matt Smith's last episode as Eleven—a bell echoing through the solar system summons the Daleks, the Silence, the Cybermen and the Weeping Angels to the backwater planet Trenzalore, home of the Doctor's tomb and a peaceful, snow-covered village called, appropriately, Christmas Town. Ever the heroes, the Doctor and his companion, Clara (Jenna Coleman), then spend the next 300 years—the timespan of the episode—pro tecting the village from the evil monsters. This could be dangerous: Trenzalore is where legend says the Eleventh Doctor will fall.

"It felt appropriate for Eleven's mythology that he face all his worst enemies at the end," says executive producer Brian Minchin. "Matt's exit is the most emotional story we've done." In the past, when an actor playing the Doctor has departed the show, his incarnation has "died" and regenerated into the next star's Doctor (in Smith's case, Peter Capaldi's Twelve). But the Doctor's species, the Time Lords, have only 12 regenerations before they are gone for good—and he's already used them all. For those counting, in addition to the Doctor's 10 standard regenerations, Eight (Paul McGann) used one to transform into the War Doctor (John Hurt) and Ten (David Tennant) used one to grow a replacement hand. So something series-altering must happen before Eleven turns into Twelve at the end of the special. That is, unless Santa brings him more regenerations.