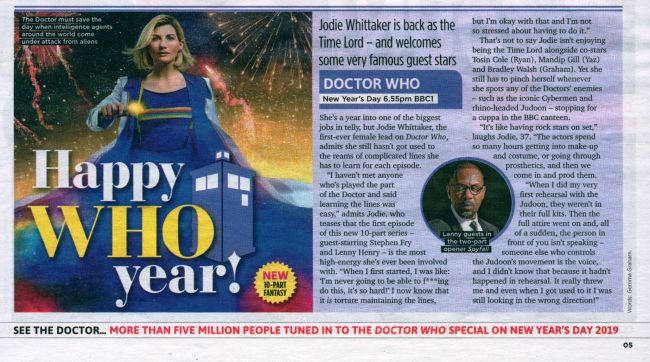 She's a year into one of the biggest jobs in telly, but Jodie Whittaker, the first-ever female lead on Doctor Who, admits she still hasn't got used to the reams of complicated lines she has to learn for each episode.

"I haven't met anyone who's played the part of the Doctor and said learning the lines was easy," admits Jodie, who teases that the first episode of this new 10-part series —guest-starring Stephen Fry and Lenny Henry — is the most high-energy she's ever been involved with. "When I first started, I was like: 'I'm never going to be able to f***ing do this, it's so hard!' I now know that it is torture maintaining the lines, but I'm okay with that and I'm not so stressed about having to do it."

That's not to say Jodie isn't enjoying being the Time Lord alongside co-stars Tosin Cole (Ryan), Mandip Gill (Yaz) and Bradley Walsh (Graham). Yet she still has to pinch herself whenever she spots any of the Doctors' enemies — such as the iconic Cybermen and rhino-headed Judoon — stopping for a cuppa in the BBC canteen.

"It's like having rock stars on set," laughs Jodie, 37. "The actors spend so many hours getting into make-up and costume, or going through prosthetics, and then we come in and prod them. "When I did my very first rehearsal with the Judoon, they weren't in their full kits. Then the full attire went on and, all of a sudden, the person in front of you isn't speaking —someone else who controls the Judoon's movement is the voice, and I didn't know that because it hadn't happened in rehearsal. It really threw me and even when I got used to it I was still looking in the wrong direction!"

SEE THE DOCTOR... MORE THAN FIVE MILLION PEOPLE TUNED IN TO THE DOCTOR WHO SPECIAL ON NEW YEAR'S DAY 2019

Caption: The Doctor must save the day when intelligence agents around the world come under attack from aliens