Happy birthday to Who 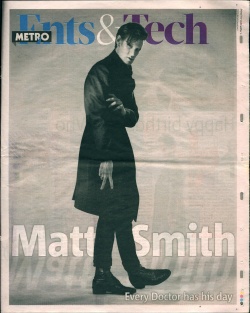 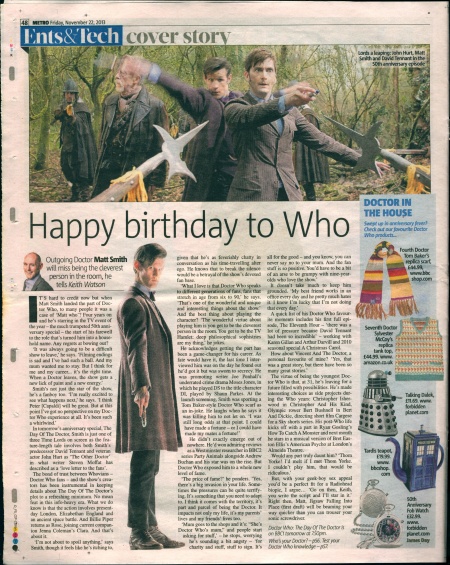 Outgoing Doctor Matt Smith will miss being the cleverest person in the room, he tells Keith Watson

IT'S hard to credit now but when Matt Smith landed the part of Doctor Who, to many people it was a case of 'Matt who'? Four years on and he's starring in the TV event of the year — the much trumpeted 50th anniversary special — the start of his farewell to the role that's turned him into a household name. Any regrets at bowing out?

'It was always going to be a difficult show to leave,' he says. 'Filming endings is sad and I've had such a ball. And my mum wanted me to stay. But I think for me and my career... it's the right time. When a Doctor leaves, the show gets a new lick of paint and a new energy.'

Smith's not just the star of the show, he's a fanboy too. 'I'm really excited to see what happens next,' he says. 'I think Peter [Capaldi] will be great. But at this point I've got no perspective on my Doctor Who experience at all. It's been such a whirlwind.'

In tomorrow's anniversary special, The Day Of The Doctor, Smith is just one of three Time Lords on screen as the feature-length tale involves both Smith's predecessor David Tennant and veteran actor John Hurt as 'The Other Doctor' in what writer Steven Moffat has described as a 'love letter to the fans'.

The bond of trust between Whovians —Doctor Who fans — and the show's creators has been instrumental in keeping details about The Day Of The Doctor's plot to a refreshing minimum. No mean feat in this info-heavy era. What we do know is that the action involves present-day London, Elizabethan England and an ancient space battle. And Billie Piper returns as Rose, joining current companion Jenna Coleman's Clara. And that's about it.

'I'm not about to spoil anything,' says Smith, though it feels like he's itching to, + given that he's as feverishly chatty in conversation as his time-travelling alter ego. He knows that to break the silence would be a betrayal of the show's devoted fan base.

'What I love is that Doctor Who speaks to different generations of fans, fans that stretch in age from six to 90,' he says. 'That's one of the wonderful and unique and interesting things about the show.' And the best thing about playing the character? 'The wonderful virtue about playing him is you get to be the cleverest person in the room. You get to be the TV Hamlet: deep philosophical sophistries are my thing,' he jokes.

He acknowledges getting the part has been a game-changer for his career. As fate would have it, the last time I interviewed him was on the day he found out he'd got it but was sworn to secrecy. He was promoting writer Joe Penhall's underrated crime drama Moses Jones, in which he played DS to the title character DI, played by Shaun Parkes. At the launch screening, Smith was sporting a Tom Baker-style Doctor Who scarf as an in-joke. He laughs when he says it was killing him to not let on. 'I was still long odds at that point. I could have made a fortune — or I could have made my mates a fortune!'

He didn't exactly emerge out of nowhere. He'd won admiring reviews as a Westminster researcher in BBC2 series Party Animals alongside Andrew Buchan and his star was on the rise. But Doctor Who exposed him to a whole new level of fame.

'The price of fame?' he ponders. 'Yes, there's a big invasion in your life. Sometimes the pressures can be quite terrifying. It's something that you need to adapt to. I think it comes with the territory, it's part and parcel of being the Doctor. It impacts not only my life, it's my parents' lives and my friends' lives too.

'Mum goes to the shops and it's: "She's Doctor Who's mum," and people start asking for stuff,' — he stops, worrying he's sounding a bit angsty — 'for charity and stuff, stuff to sign. It's all for the good — and you know, you can never say no to your mum. And the fan stuff is so positive. You'd have to be a bit of an arse to be grumpy with nine-year-olds who love the show.'

It doesn't take much to keep him grounded. 'My best friend works in an office every day and he pretty much hates it. I know I'm lucky that I'm not doing that every day.'

A quick list of his Doctor Who favourite moments includes his first full episode, The Eleventh Hour — 'there was a lot of pressure because David Tennant had been so incredible' — working with Karen Gillan and Arthur Darvill and 2010 seasonal special A Christmas Carol.

How about Vincent And The Doctor, a personal favourite of mine? 'Yes, that was a great story, but there have been so many great stories.'

The virtue of being the youngest Doctor Who is that, at 31, he's leaving for a future filled with possibilities. He's made interesting choices as side projects during the Who years: Christopher Isherwood in Christopher And His Kind, Olympic rower Bert Bushnell in Bert And Dickie, directing short film Cargese for a Sky shorts series. His post-Who life kicks off with a part in Ryan Gosling's How To Catch A Monster and next month he stars in a musical version of Bret Easton Ellis's American Psycho at London's Almeida Theatre.

Would any part truly daunt him? 'Thom Yorke! I'd melt if I met Thom Yorke. I couldn't play him, that would be ridiculous.'

But, with your geek-boy sex appeal you'd be a perfect fit for a Radiohead biopic, I argue... 'Go on then, Keith, you write the script and I'll star in it.' Right then, Matt, Jigsaw Falling Into Place (first draft) will be beaming your way quicker than you can trouser your sonic screwdriver.

Doctor Who: The Day Of The Doctor is on BBC1 tomorrow at 750pm.

Swept up in anniversary fever? Check out Who products...