Have you seen a Dr Who Dalek roaming the streets? 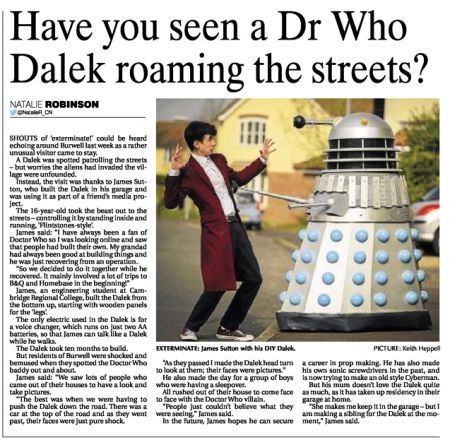 SHOUTS of 'exterminate!' could be heard echoing around Burwell last week as a rather unusual visitor came to stay.

A Dalek was spotted patrolling the streets - but worries the aliens had invaded the village were unfounded.

Instead, the visit was thanks to James Sutton, who built the Dalek in his garage and was using it as part of a friend's media project.

The 16-year-old took the beast out to the streets - controlling it by standing inside and running, 'Flintstones-style'.

James said: "I have always been a fan of Doctor Who so I was looking online and saw that people had built their own. My grandad had always been good at building things and he was just recovering from an operation.

"So we decided to do it together while he recovered. It mainly involved a lot of trips to B&Q and Homebase in the beginning!"

James, an engineering student at Cambridge Regional College, built the Dalek from the bottom up, starting with wooden panels for the legs'.

The only electric used in the Dalek is for a voice changer, which runs on just two AA batteries, so that James can talk like a Dalek while he walks.

But residents of Burwell were shocked and bemused when they spotted the Doctor Who baddy out and about.

James said: "We saw lots of people who came out of their houses to have a look and take pictures.

"The best was when we were having to push the Dalek down the road. There was a car at the top of the road and as they went past, their faces were just pure shock.

As they passed I made the Dalek head turn to look at them; their faces were pictures."

He also made the day for a group of boys who were having a sleepover.

All rushed out of their house to come face to face with the Doctor Who villain.

"People just couldn't believe what they were seeing," James said.

In the future, James hopes he can secure a career in prop making. He has also made his own sonic screwdrivers in the past, and is now trying to make an old style Cyberman.

But his mum doesn't love the Dalek quite as much, as it has taken up residency in their garage at home.

"She makes me keep it in the garage - but I am making a sibling for the Dalek at the moment," James said.